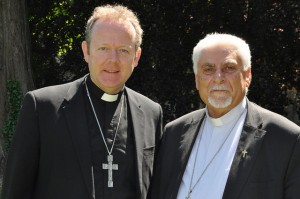 In July 2014, when Mosul was captured by the terror group Daesh (ISIS), Christians living in the area were called either to convert to Islam, pay a protection tax or to leave the city.

Otherwise they were risking their lives.

Christianity remains under attack in Iraq.

St Elijah’s is believed to have been built by Assyrian monks in the 6th century.

Moreover, other Christian sites as well as pre-Islamic ruins have been demolished by the terror group like Hatra, Nimrud and Nineveh.

Saher Kawas from the Latin Patriarchate of Jerusalem spoke to Bishop Yohanno Petros Mouche, Syriac Catholic Archbishop of Mosul, Kirkuk and Kurdistan about his experience during the disastrous summer of 2014 and the state of Christians in Iraq now.

During the summer of 2014 Mosul was seized by militants of the Islamic State, could you tell us what you have witnessed then?

After our Iraqi army ran away, ISIS conquered the town of Mosul in early June 2014. Terrified by the presence of ISIS most of our Christians, as well as a large number of Muslims, left the town of Mosul and headed towards Kurdistan and the villages of Nineveh plains.

In the beginning, forces of IS showed sympathy towards the Christians. However, few days later they set conditions which would allow Christians to live under their control: becoming Muslims, which would enable us to get all the rights, pay taxes – that means becoming 2nd class citizens – or else leave our homes and properties.

Other than that we are putting our lives at stake.

The situation was not easy to judge… As the central government was absent, I got in touch with the leading Kurdish figures that were among us.

When the first attack of IS took place against Kirkuk, the largest Christian village, in order to drive out the Peshmerga, the Kurdish army was around to defend our area.

I played the role of a mediator between the leaders of IS and those of Peshmerga, but in vain.

The fighting lasted three days, the majority of our citizens left the village except for some hundred inhabitants, my own clergy and myself. ISIS militants could not enter in our neighbourhood.

Only when the second attack was launched on August 6, ISIS managed to get in and take control over all our towns and villages after our departure and the escape of our army.

Consequently we left everything behind and went to Kurdistan to save our lives and secure our faith and integrity.

At that time you sent a message to Pope Francis and to the world. What was the response? And if you want to send an appeal now, what will you say differently?

When I met with the Holy Father on Wednesday September 30, I handed over to His Holiness a letter thanking him for his prayers and for all the donations he had done for us, requesting him to exert his influence on the leaders of the world to free our towns and villages, and if possible to find for us temporary places in countries like France, Spain, in order to live and practice our liturgy and customs.

Our situation and our emigration seem to have got stuck because of the long duration, but if we are hosted in groups our return will be easier in case our territories are set free and our rights secured.

In my testimony on the respect of life and of the human being in Jerusalem, on the occasion of the World Day of the Sick, I sent another appeal to Pope Francis and to each good-willed person.

What can you tell us about the daily life of Christians who still live in Iraq? What gives them hope?

As a matter of fact, our situation is hard, our future is gloomy, and people are tired. They are waiting for a solution whereby they can restore their dignity, where their life, their future and that of their children will be protected.

That’s the reason why several families have already left the country and many others are thinking to do so.

We love our country for as long as living there is possible. We are proud of our religion. We hope that our towns, our villages and our churches will be set free and that we will enjoy a protected zone where we can live all our rights.

Otherwise, we hope that the authorities will find for us shelters elsewhere, in other countries, but that would be a loss for our community and for our land inherited from our ancestors.