Home > News > Synod needs to show how teaching can develop

Synod needs to show how teaching can develop 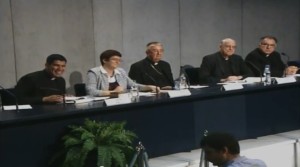 Archbishop Diarmuid Martin at Rome Synod briefing at the Vatican.

by Christopher Lamb of The Tablet in Rome (www.thetablet.co.uk)

The bishops’ Synod on the family must show that Church teaching can develop so it can respond to the difficulties faced by ordinary Catholics, the Archbishop of Dublin has said.

“This synod can’t simply repeat what was said 20 years ago,” Archbishop Diarmuid Martin told journalists at a briefing in the Vatican on Saturday, halfway through the two weeks of discussions.

“It has to find new language to show that there can be development of doctrine, that there has been a willingness to listen to what emerged in the questionnaire that went out and what was said at the synod itself.”

The questionnaire before the synod asked Catholics around the world a range of questions on family life including issues such as divorced and remarried couples, same-sex unions and contraception.

Archbishop Martin said that the Church’s understanding of marriage and family was moving away from something that is “simply taught” to people.

Instead, he explained, married couples are an “ecclesial reality” helping to build up the Church, and their experiences can be learnt from.

The archbishop pointed out that the Church is not good at “dealing with exceptions” and that most Catholics lived their lives in the “grey areas”.

He also stressed the need for the Church to find ways to better prepare people for marriage.

“Problems won’t be solved by a two-day marriage preparation course; what is needed is a much stronger catechesis on marriage and family life among Christian community and society in general,” he said.

He added that the pastoral care of marriage and family in his diocese was not adequate.

The three moderators in the English-speaking groups are Cardinal Raymond Burke, Prefect of the Apostolic Signatura and an outspoken critic of proposals to allow any change to the ban on Communion for divorced and remarried Catholics; Cardinal Wilfrid Napier, Archbishop of Durban; and Archbishop Joseph Kurtz of Louisville, President of the Bishops’ Conference of the United States.

A document – known as a relatio – summarising what has been said at the synod so far, is to be presented at a press conference. This will also form a framework for the rest of the discussions.

The document’s drafting will be led by Hungarian Cardinal Peter Erdo, the synod’s relator general, and his team.

In addition, on Friday Pope Francis announced that six others, a number of whom he is close to, would help with the drafting.

Archbishop Martin said he expected the final document following this synod not to be a list of propositions but rather a working paper to be discussed ahead of the larger Ordinary Synod that will take place in October 2015.

The full briefing on Saturday with Archbishop Martin can be watched here: https://www.youtube.com/watch?v=qjd7cS_Z84c#t=26