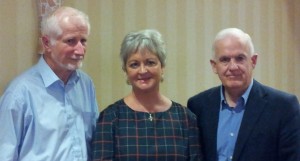 The Association of Catholics in Ireland has called for greater participation of the married laity at the Synod on the Family in October.

Publishing the ACI membership’s response to Pope Francis’ invitation to contribute to the Synod, the document outlines a number of themes discussed at the Open Forum hosted by the group in March.

It has been forwarded to Rome and to the Irish bishops and the ACI plans to discuss it with the Archbishops of Armagh and Dublin, who will act as the Irish representatives at October’s Synod.

The themes discussed at the Open Forum were taken from the Synod’s Lineamenta Questionnaire and include:

– Marriage breakdown, social, economic factors, pastoral issues;
– The status of different ‘second relationships’ and access to the sacraments for those in ‘second relationships’;
– The annulment process, options for widening and simplifying the process;
– Issues surrounding co-habitation;
– Humanae Vitae and family planning;
– Same sex relationships, the sacraments, pastoral support;
– Possible pastoral responses to the identified problems and issues impacting on the various forms of ‘family’;
– Family and Faith: What support does the family need in developing and spreading the faith?

Some key points from the Submission:
– Priests who left the Church to marry should be invited back and would bring the experience of marriage to their ministry.
– Women and married couples should train priests for the ministry of marriage and the family.
– Post ordination education of priests on marriage and the family is needed.
– Humanae Vitae teaching on artificial birth control has been rejected by the majority of the church in Ireland. It has damaged the Church and contributed to the exodus of young people from the Church and should be changed.
– The annulment procedure requires greater transparency and a neutral mediation service provided to help people through the process. Co-habitation is a normal part of modern relationship development. The Church needs to recognise this and support couples through pastoral care programmes to help them move towards permanent commitment.
– There should be no exclusion from the sacraments for those in mixed marriages, second relationships, etc. If a full open-table policy is not possible, then develop alternative worship services. Communion should not be used as a reward or punishment. Who has the right to deprive a person of ‘good faith’ of this essential spiritual nourishment?
– Full membership of the Church should be extended to those in second relationships. Is the Church an obstacle to the relationship between these couples and God? How would Jesus respond to their needs?
– Pastoral care should be provided to support LGBT people, their parents and families. The legitimacy of personhood of people must be respected. The language of the Church must change.

To the question ‘Where is love in the Lineamenta?’ people responded that the attitude of the Church should be based on the example of Jesus; open, welcoming and loving to all.

The full submission can be accessed on http://www.acireland.ie/wpcontent/uploads/2015/04/ACI-SYNOD-ON-THE-FAMILY-CONSULTATIONSUBMISSION.pdf

The Association of Catholics in Ireland (ACI) is committed to the pursuit of a reform and renewal agenda in the Irish Catholic Church based on the letter and spirit of Vatican II.

It is committed to helping to re-build (through words and deeds) a united Church based on the teachings of Jesus Christ – a Church that is inclusive, compassionate, accepts the equality of all believers by virtue of their baptism and acknowledges its failures.