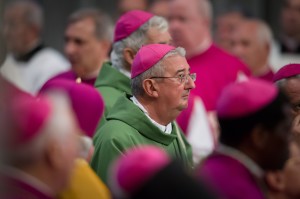 Archbishop Diarmuid Martin has told delegates attending the Extraordinary Synod on the Family in Rome that the Church must listen and consult with married couples.

In his address on Tuesday morning, the Archbishop warned that this listening and consultation should not be an “option which we take up on special occasions”.

The Irish representative at the Synod appealed to the Church to find a new language of dialogue between the teaching of the Church on marriage and the lived experience of Christian spouses.

He said this new language needed to begin with listening because for many couples the language of the Church appears to be about telling them what to do, a “one way dialogue”.

However, he said he was in no way saying that the Church is not called to teach about marriage or that experience on its own determines teaching or the authentic interpretation of teaching.

The sacrament of marriage is a gift given for the building up of the Church in holiness and marriage thus holds a special ecclesial status he noted.

He cited Lumen Gentium which states that “Christian married couples help one another to attain holiness in their married life”.

The authentic living out of the married vocation, sanctified by a sacrament, can become in a unique way a true theological source Dr Martin suggested as he observed that Familiaris Consortio spoke of the law of graduality rather a graduality of the law.

He suggested that the lived experience and struggle of spouses can help find more effective ways of expressing the fundamental elements of Church teaching.

Elsewhere in his address, Archbishop Martin paid tribute to married couples who live out the value of marital fidelity day-by-day “at times heroically”.

He reminded over 250 participants at the gathering that many of these couples lived this fidelity without making explicit reference to the teaching of the Church.

“They would hardly recognise their own experience in the way we present the ideals of married life,” he said and suggested that many couples, out of genuine humility, “would probably feel that they are living a life which is distant from the ideal of marriage as presented by Church teaching.”

Speaking of the sacrifices made by Irish parents, especially those in poorer areas, he said many had experienced all the economic and social difficulties which affected the country during a dramatic economic crisis, “yet they continue to live the daily realities of family relationships and commitment to the education of their children.”

Yet, there was “still difficulty in accepting the significance of human endeavour which fails to reach the high ideals but is part of the struggle for perfection,” he commented of the standards of perfection expected by those most staunchly upholding the Church’s teaching.

In his address, the leader of the Church in Dublin said the Church must listen to those Christian married couples “who struggle and fail and begin again”.

The Archbishop said the Church needs to hear from those couples who “begin again in the concrete situations of the harshness of life today”.

“The experience of failure and struggle cannot surely be irrelevant in arriving at the way we proclaim the Church’s teaching on marriage and the family.”