Home > News > Synod exhortation may be published by weekend

Synod exhortation may be published by weekend 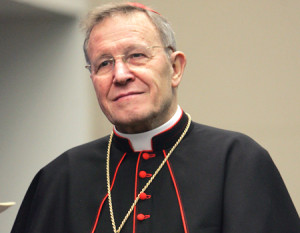 German Cardinal Walter Kasper has reportedly hinted that Pope Francis’s conclusions on the Synod on the Family could be released as early as this weekend.

An article in the Italian provincial newspaper ‘Il Terreno’ claims the high profile theologian told an audience in the Tuscan city of Lucca on Monday evening that in a “few days” a document of about “two hundred pages will be released”.

Commenting on the report, Edward Pentin of the National Catholic Register said it was not clear if, by saying “released”, Cardinal Kasper meant that the post-synodal apostolic exhortation would be published on Saturday, or be signed by Pope Francis and published later once it is translated.

This is what usually happens with such documents and up to now indications from the Vatican have suggested that the document will be signed on 19 March, the Feast of St Joseph, but the actual date of publication has remained unknown.

Cardinal Kasper also hinted in his Lucca address that the Pope will address the contentious issue of the participation of the divorced and remarried faithful suggesting that the apostolic exhortation would represent “the first step in a reform” that will mark the “turning of a page” in the Church’s history “after 1,700 years.”

“We must not repeat past formulas and barricade ourselves behind the wall of exclusivism and clericalism,” Cardinal Kasper reportedly told the audience in Lucca’s Real Collegio.

He also spoke about giving more opportunities for women to serve in Church administration.