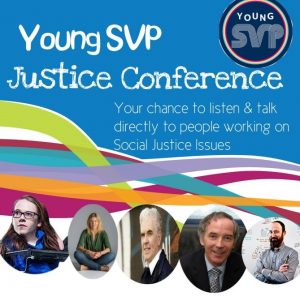 Young people were called to action at the launch of the St Vincent De Paul’s schools’ programme at Knock Shrine on 14th September. The participants were urged to use their voices and power to tackle social justice issues.

“We are excited about this conference. It is an opportunity for young people in the region to hear more about the work of the Society and to get involved in whatever way they can,’ said Michael Mc Cann, President, West Region St Vincent De Paul (SVP) which hosted the event.

The 10 senior cycle students who attended from each school around the West Region (Mayo, Roscommon and Galway), went back to their respective schools as social justice advocates. They will help with the Young SVP youth development programme in their schools and help their fellow students to get involved.

“It was very positive, very very powerful. The students were engaged. The speakers were very inspiring,” Paddy Daly told catholicireland.net.
With up to 300 participants attending, he added: “it was the day after the Junior Cert results, and we were delighted that so many turned up.”

Paddy Daly said that Joanne O Riordan stole the show as she was uplifting, funny and inspiring and full of ‘can do’. Everyone wanted a ‘selfie’ photo with her. She was born with a rare condition known as Total Amelia and has no limbs. She is only one of seven people in the world living with this disability, but she never looks at herself as being different. Joanne Riordan has often stated that when she looks at her life she says, “I’m unique”.

Fr Peter McVerry, who is well known to many for his work with the homeless, is both an activist and advocate for those who have no voice in society. He gave the students practical suggestions about how to help the homeless including stopping to talk to someone begging on the street.

Dr Cara Augustenborg is Chairperson of Friends of the Earth Ireland, and an environmental scientist who lectures on climate change and the environment on UCD’s MSc programme on World Heritage Management and Conservation. In 2008, she went on the Arctic expedition sponsored by Ben & Jerry’s Climate Change College and the World Wildlife Fund and witnessed the effects of climate change first hand.

She spoke about the recent Electric Picnic in Co Laois and how her organisation tried to help reduce waste. However, many just walked away and left tents and lots of rubbish behind. She emphasised that as an American she can see how beautiful Ireland is, and cannot understand how people can destroy that.

John Lonergan was Governor of Mountjoy Prison until his retirement in 2010. He has written a memoir, The Governor: The Life and Times of the Man who ran Mountjoy. He spoke about pride in one’s place and community especially as Mayo was to play in the All Ireland. Many students asked him about prison and if he managed to inspire any prisoners.

“My sense of young people is they are willing to listen if you have something to say. They give you a listening ear, you don’t get dismissed when you are talking about social justice and fairness and goodness. They have very good hearts,” Paddy Daly said after the conference.

There were also practical interactive presentations such as how to create a mobile beach, where sand and seaweed can be brought into a setting like a nursing home in an effort to bring the beach to the people who cannot go themselves.

A wind phone was made. This was a re-creation of an empty old-fashioned phone box where someone can go simply to speak and unburden themselves. The conference participants signed their names in the box symbolizing their willingness to listen.

There was a miniature postcard sized forest with baby oaks. There was a game that everyone can play, especially those with a disability.
“It was very practical so if young people go to a nursing home now they have lots of ideas about what they can do. It equipped young people so they have something to share,” said Paddy Daly.

He said that the teachers present at the conference were very positive about the meeting, which was the first of its kind in the West. He expects that each group of 10 young people will go back to their schools and begin with social justice actions within the Transition Year classes and larger school.