The Society of Saint Vincent de Paul (SVP) has called on business and political organisations to read the President’s Ethics report which was published on Monday (1 February 2016).

“As the President said today economic policy must be located within an understanding of social values, we need a broad discussion about society, not just an economy and we need to return to the language of citizens, rather than consumers or taxpayers,” said Caroline Fahey, SVP Social Justice Policy Officer.

President Higgins at the launch of the report titled ‘On the Importance of Ethics. A Report on the President of Ireland’s Ethics Initiative’ explained, “We must resolve that we will take real action to not just close a chapter on that which was not the best version of ourselves; but begin a new one, choosing to create opportunities that will invite citizens to what is a real Republic; a Republic founded on true freedom, inclusion and equality, a Republic in which we can all be participatory and proud citizens.”

He said that there is a will to act, to engage, and to transform society and this is “an inextinguishable resource” which much be harnessed and translated into deeds and actions.

President Higgins plans to launch a special initiative later this year to include practical and policy level changes to bring forward a more ethical and inclusive society.

Actions already completed include a new Centre for the Study of the Moral Foundations of Economy and Society, and philosophy is to be introduced to the secondary school curriculum as a subject.

The SVP said it was pleased to have played an active role in President Higgins’s Ethics Initiative since it was launched in November 2013.

The initiative resulted in over 60 events being held by third level institutions and community and voluntary groups, as well as international conferences and workers campaigns as well as coffee shop discussions.

“The report now provides an opportunity to broaden the discussion to other areas of Irish society. It is clear that we need a broader discussion involving all parties about the ethics around unequal experiences in relation to health, housing, employment and direct provision. These are key issues in any vision of a fairer and more just Irish society,” said Caroline Fahey, SVP Social Justice Policy Officer.

The SVP was among community and non-governmental organisations such as the Wheel, ICTU, the National Women’s Council, and Dóchas who were involved.

They explored key social issues facing the country in the wake of that crisis; such as what constitutes community solidarity, decent work, meaningful equality, and how poor are we and what reduces it.

“Again and again the importance of locating economic policy within a framework of social values that could create and sustain social cohesion came to the fore of discussions,” said the President.

He said that now, as a new phase of transformative action must begin, Ireland is at a critical time, during 2016 we can reflect and re-imagine the Republican ideals articulated a hundred years ago.

“A Republic, by its very definition, cannot be a republic for some but not for others. It must be a place of inclusion and equality, where the full participation of all citizens is understood as a right, but also as a democratic duty,” he said. 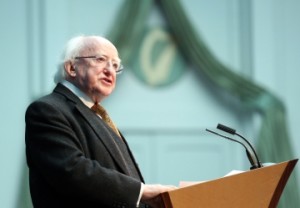 The President cautioned that transformation into an ethical society must extend into “every corner of society” for example communities, schools, workplaces; and the worlds of business and finance, public service and the arts; as well as into the political and electoral choices which we all make.

In his meetings with the people of Ireland during the initiative he feels there is an “appetite” to take up this challenge and already a positive momentum for change.

He gave the example of the Red Cross register of pledges of Irish citizens for offers of accommodation, goods or services to refugees coming to Ireland.

Likewise the Irish Navy’s humanitarian work in rescuing refugees in the Mediterranean Sea.

President Higgins also praised the sense of community solidarity that came to the fore during the recent flooding in Ireland.

“In my work as President I am inspired every day by the magnificent volunteers working at every level of our society to help those in need and to improve their community, their country or their world. This is Ireland at its best,” he said.

◦ More information: www.president.ie/special-initiatives/ethics
◦ The report can be read via https://issuu.com/arasanuachtarain/docs