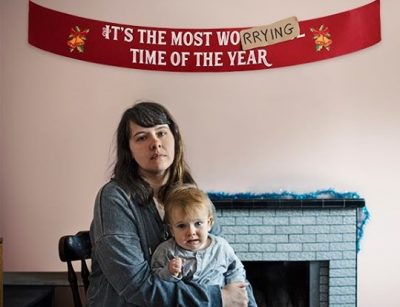 The Society of St Vincent de Paul (SVP) has called Christmas “the most worrying time of the year”. While many liken it to the words in the song, “It’s the most wonderful time of the year”, those who seek help from the SVP find it puts serious strain on their limited resources.

This winter SVP expects calls for help to increase to more than 50,000. These come from families across Ireland who need the basics such as food, fuel and support for school.

Ryan Tubridy, an honorary member of the SVP, was at the launch of the Annual Appeal on 20 November 2019 and expressed his shock that almost 4000 children will wake up in emergency accommodation on Christmas morning.

Kieran Stafford, National President, SVP, who was also at the launch, said: “Last year our volunteers visited 50,000 homes in the winter period and with the 2019 calls for help so far running ahead of the 2018 figures we expect that the figure for this year will increase.”

He added that these people want to make Christmas special for their children and families like everyone else. “But they lack the financial resources to meet the additional costs this time brings, and are already struggling to pay for food, heating and rent,” he said.

Kieran Stafford stated that this year the SVP has again put children to the fore because children are the most vulnerable and should not suffer because society has got things so wrong.

“This year we hope to bring a happy Christmas to the many children living in poverty especially the 3873 without a home,” he said.

The SVP relies heavily on its Annual Appeal to be able to respond to thousands of requests for help.

Earlier in the month the SVP unveiled a special banner on Liberty Hall, Dublin ahead of the Annual Appeal, playing on the building structure to show empty cupboards alerting the public to the fact that so many in Ireland will be hungry this Christmas. 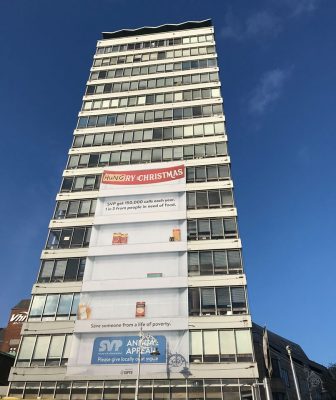 “This is to highlight the startling prevalence of food poverty which has increased across Ireland in recent years,” said Nichola Mullen, Head of Fundraising. “Of the 150,000 calls SVP will receive for the total year, one in three will be from people without enough food.”

She also said that the SVP will use its Annual Appeal to continue to trial “Tap to Donate” contactless card machines during its church gate collection day on Sunday 8 December. This activity is sponsored by SumUp and Visa Ireland.

As well as direct donations, there are other options including the Giving Tree Appeal, the Food Appeal and a virtual gift store.
See: www.svp.ie/appeal.