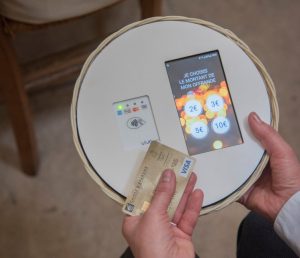 An electronic Paniers de Quete being used in Paris. (Photo: Archdiocese of Paris)

This week, Ireland’s largest charity, the Society of St Vincent de Paul, announced that it is testing out new cashless collection boxes. Charity workers key in an amount and members of the public have their bank cards scanned to make donations directly from their bank accounts.

The SVP’s move is prompted by the fact that Irish society is becoming increasingly cashless.

Last year, contactless payments using credit card and/or debit cards increased in volume by 52 per cent, according to a Banking & Payments Federation Ireland report. A survey by Eurostat last year showed that 31 per cent of Irish enterprises used online as a sales channel, the second highest in the EU; and the percentage of total sales transacted online (35 per cent) is the highest in the EU.

Consultancy firm The Future Laboratory has predicted that, if trends continue, within the next five years most payments in Ireland will be electronic rather than cash based.

Already, the SVP has tested five CollecTin devices with built-in card readers at four fundraising events, including a church-gate collection, a bag pack, a raffle and a clothes swap. The pilot was made possible via a partnership with the payments firm Visa and SumUp, a developer of the card reader technology.

More than €800 was raised using the devices, with volunteers saying they loved the design and ease of use of the CollecTin machines. A device that collects €200 in electronic payments is much easier to carry than a bucket full of €200 worth of loose change.

Based on the first pilot scheme, the SVP has decided to purchase 80 CollecTin devices for further trialling with conferences in eight regions.

“To protect this revenue stream, we wanted to move with the times and give donors an option to use their payment cards or devices. We were delighted to partner with SumUp and Visa for this trial. We were unsure how donors would respond given that we were one of the first charities to trial this, but the engagement far exceeded our expectations.”

“For example, at a raffle held during a tech company’s Christmas market day, almost 50 per cent of the donations received were through the contactless CollecTin,” she said. “This is definitely the way forward for bucket collections and events and we look forward to rolling out the use of the CollecTins to volunteers around the country.”