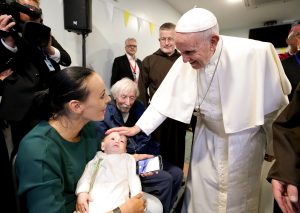 Pope Francis held a private 90-minute meeting with victims of clerical abuse, residential institutional abuse and mother and baby homes at the papal nunciature in Dublin on Saturday.

The meeting followed the Pope’s strong comments in his speech at Dublin Castle on Saturday morning, in which he referred to the “grave scandal” of the abuse of young people.

The issue has dominated the World Meeting of Families and was being keenly watched on the first day of the papal visit.

At St Mary’s Pro Cathedral on Saturday afternoon, Pope Francis prayed for the victims of clerical sex abuse before a candle perpetually lit for survivors.

In his Dublin Castle address, Pope Francis said, “I cannot fail to acknowledge the grave scandal caused in Ireland by the abuse of young people by members of the Church charged with responsibility for their protection and education.”

“The failure of ecclesiastical authorities – bishops, religious superiors, priests and others – adequately to address these repellent crimes has rightly given rise to outrage, and remains a source of pain and shame for the Catholic community. I myself share those sentiments.

“My predecessor, Pope Benedict, spared no words in recognising both the gravity of the situation and in demanding truly evangelical, just and effective measures to be taken in response to this betrayal of trust.”

The Pope added that it was his hope that the “gravity of the abuse scandals which have cast light on the failings of many, will serve to emphasise the importance of the protection of minors and vulnerable adults on the part of society as a whole”.

Speaking alongside the Pope at Dublin Castle, Taoiseach Leo Varadkar did not shy away from the issue. He told the Pontiff that there are “dark aspects” of the Church’s history.

“We think of the words of the Psalm which tells us that ‘children are a heritage from the Lord’ and we remember the way the failures of both Church and State and wider society created a bitter and broken heritage for so many, leaving a legacy of pain and suffering,” Mr Varadkar said.

He added, “It is a history of sorrow and shame.”

Mr Varadkar said that in place of Christian charity, forgiveness and compassion, “far too often there was judgement, severity and cruelty, in particular, towards women and children and those on the margins”.

He said the Magdalene Laundries, mother and baby homes, industrial schools, illegal adoptions and clerical child abuse are stains on the State, Irish society and the Catholic Church.

“Wounds are still open and there is much to be done to bring about justice and truth and healing for victims and survivors.”

Addressing the Pope directly, the Taoiseach appealed, “Holy Father, I ask that you use your office and influence to ensure this is done here in Ireland and across the world.” 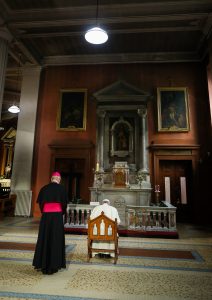 At St Mary’s Pro Cathedral, Pope Francis prayed before the “candle of innocence” – a memorial to the victims of abuse at the hands of church personnel. (Pic: MAXWELLS)

He also referred to the recent report of the Pennsylvania grand jury and its stories “of brutal crimes perpetrated by people within the Catholic Church, and then obscured to protect the institution at the expense of innocent victims. It is a story all too tragically familiar here in Ireland.”

“There can only be zero tolerance for those who abuse innocent children or who facilitate that abuse. We must now ensure that from words flow actions.”

Mr Varadkar appealed to the Pontiff to listen to the victims.

Ahead of Pope Francis’ arrival at Dublin Castle, he went to Áras an Uachtaráin where President Michael D. Higgins raised with him the immense suffering and hurt caused by child abuse by some within the Catholic Church.

The president conveyed how angry people were over what was perceived to be the impunity enjoyed by those who had the responsibility of bringing such abuses to the appropriate authorities for action, but had not done so.

Mr Higgins said he welcomed the honest and forthright language that the Pope used when addressing the issue of clerical abuse in his recent Letter to the People of God.

On Saturday late afternoon, eight survivors, seven of whom were happy to be identified, heard the Pontiff describe those who covered up the abuse as “filth”.

At the meeting, Pope Francis was urged by survivors to use his influence to encourage the religious orders that ran Ireland’s mother and baby homes to make a public apology for the practice.

In a statement, the Coalition of Mother And Baby Home Survivors said Pope Francis had agreed to include a message on this matter when he says Mass in the Phoenix Park on Sunday afternoon.