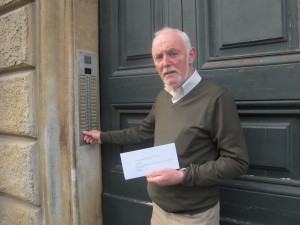 Brendan Butler of We Are Church Ireland outside the CDF in the Vatican.

A new survey of catholic opinion in Ireland shows a clear majority believe the diaconate should be open to women and men.

The survey was carried out by the lay reform group We Are Church Ireland (WACI).

In the poll of nearly 500 men and women, 84% of the respondents said they believe women should be ordained deacons. Just 13% were opposed and 3% were undecided.

The poll also showed that 79% of respondents were aware that women deacons were common in the first 1,000 years of Christianity.

Responding to the outcome, Brendan Butler of WACI said these new poll findings would be forwarded to the next meeting of the Irish Bishops’ Conference in December in Maynooth.

“We want no more male deacons ordained until women are included and we would hope that any bishop who attempts to introduce the male-only permanent diaconate would receive the same answer as the Killaloe women gave,” he said.

In spite of the Catholic Church’s ban on women’s ordination to the priesthood, Brendan Butler claimed there is no biblical or theological reason for the exclusion of women from the diaconate.

He said the exclusion of women from the diaconate stemmed from “misogyny and the fear of women”.

“The Church’s credibility to speak on justice issues in the world is severely discredited, especially among young people, because of its unjust discrimination of women in the Church,” he warned.

Brendan Butler also urged the Irish bishops to call a national assembly to discuss the position of women in the Church.

His assembly call was backed by Kathleen McDonnell of Seeds of Hope, the group a women in the Diocese of Killaloe who successfully campaigned to have the introduction of the permanent diaconate postponed.

Ms McDonnell said she would welcome a national assembly “wholeheartedly” if people could openly discuss issues without fear of being punished.

She referred to Pope Francis’ call to his bishops at the recent Synod not to be afraid to speak out. “People will have differing opinions but that’s natural. Once we can listen to each other with respect – dialogue is the only way forward.”

However, Kathleen McDonnell said the group she represents is advocating that the Church rethink the need for the diaconate.

“Many people don’t actually realise that laity can fulfil all of those roles of a deacon including the sacramental ministries of baptism and marriage and presiding at a funeral liturgy.”

She said she believed that if that fact was more widely understood it might change people’s views about introducing another ordained ministry.