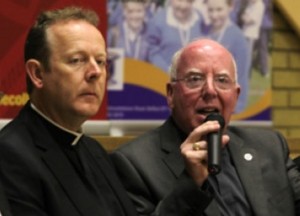 Bishop John McAreavey of the Bishops’ Council for Justice and Peace has said he is “delighted” by last week’s Supreme Court ruling requiring a change in the law prohibiting asylum seekers from working.

Referring to the words of the Supreme Court ruling that “This damage to the individual’s self-worth, and sense of themselves, is exactly the damage which the constitutional right [to seek employment] seeks to guard against,” the Bishop of Dromore said that the words were “powerful and profound”, and speak to what we should aspire to.

In a statement on Monday, the Bishop said it is an issue which is close to the heart of Pope Francis, who has appealed to all countries for “a generous openness” which recognises how migration can enrich lives.

He said that over recent years the Council for Justice and Peace has publicly raised issues related to direct provision centres.

“Our main concern has been the physical and psychological welfare of individuals and families in these centres.”

He urged politicians to see “the great merit – moral, civic, cultural and economic – of allowing migrants who are already in Ireland to participate and contribute to our society here”.

He said: “I would encourage policymakers to balance the government’s duty to manage the resources of the State with the parallel duty to treat asylum seekers humanely. Asylum seekers and their families have greatly suffered and it is their dear wish to integrate and contribute to the common good of Irish society.”

Bishop McAreavey said the removal of the ban on work meant people in direct provision centres were more likely to integrate and be part of a rich, diverse and yet more unified society; “asylum seekers will recover their self-respect through work and we all will benefit from their skills and gifts,” he stressed.

“I am grateful to the Supreme Court for reminding us, during these unsettled and cynical times, of what we must be about as a culture, namely, a society that both protects the person and allows his or her talents to flourish.”

Up to last week’s ruling, Ireland and Lithuania were the only two of the EU’s 28 member states that forbade asylum seekers to work under any circumstances.

The other 26 states allow asylum seekers to work, though under varying conditions.