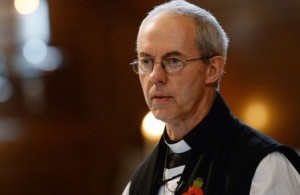 The Archbishop of Canterbury, Justin Welby, has urged supermarkets to do better at diverting produce to feed the poor.

His call follow the revelation in a new report that 10,000 Cornish pasties were binned when a delivery was 17 minutes late, and 10 tonnes of tomatoes were rejected by a retailer because they were too big.

The report on Feeding Britain by an all party group of MPs and which has been backed by Archbishop Welby, calls for supermarkets to play a key role in a coordinated national system to support food banks.

The report also calls for supermarket to address supply chain inefficiencies to redirect waste food to the poor.

Archbishop Welby, at the launch of the All-Party Parliamentary Group Inquiry Report on Hunger and Food Poverty in Westminster on Monday 8 December said: “The years since the 2008 crisis have been hard ones for many.”

“And the response of compassion, indiscriminate compassion, generous open-handed compassion, has come principally from the churches in response to people’s need for food.”

He said that while it is a political risk to do something that is all-party, this important report has been completed and has proposed a new organisation, Feeding Britain.

The Archbishop has accepted the invitation to be president of the new body.

“In the longer term, we’re looking at making a transformative difference to the lives of many in this country – and to the nature of the communities we are all part of – without great financial cost,” he said.

The report states that Feeding Britain has the overall goal of a hunger-free United Kingdom.

In its summary of 77 recommendations it states that the new body should be composed of members of the food bank movement as well as similar voluntary organisations, and the food industry, as well as relevant government departments.

It emphasises the importance of redistribution of fresh surplus food for example by working with through the supply chains of retailers and manufacturers to harvest and donate farm crops rejected by retailers because of their appearance.

Retailers are encouraged to double the portion of surplus food they redistribute to those in need.

The report recommends that the food industry as a whole set a target to reduce the amount of food disposed of in landfill and composted or energy by 100,000 tonnes each year by the end of the next Parliament.

It states that a large proportion of primary schools that responded said that children arrive at school hungry because parents could or would not wake up to get them breakfast or to bring them to school breakfast.

Classes in budgeting and parenting, cooking, and food skills were recommended.

The report covers a broad spectrum including fuel and energy costs, cheaper access to mobile phones and internet as well as changes to the welfare and tax system, and to the minimum wage, to reduce hunger.

It concludes that hunger is ‘here to stay’ in Britain until counteraction is taken.