Mercy Sisters buoyed up by response to weekly NHS singalong 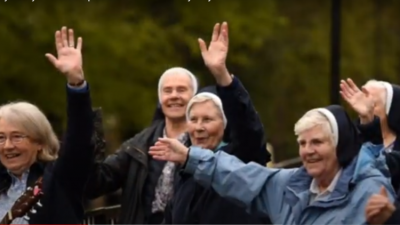 Sisters of Mercy of St Anthony’s Convent of Mercy in Thornhill. Image: courtesy Conference of Religious of England and Wales.

A weekly singalong for the NHS by a community of Mercy Sisters in Sunderland has resulted in the nuns forging new links with a wider number of people and has prompted them to explore new forms of outreach.

The ‘Singing Sisters’ from the St Anthony’s Convent of Mercy in Thornhill hosted a weekly singalong and ‘Clap for Carers’ throughout the Covid-19 lockdown.

Each week, as word of their hymn singing spread, more people turned up to join in and this in turn garnered more media attention for their gathering.

Initially their singing caught the attention of local journalists and was then picked up by global news outlets, including CNN in the US. They even appeared on a video of the Duke and Duchess of Cambridge’s ‘Clap for the NHS’.

The Sisters told the Conference of Religious of England and Wales website that they were “totally taken aback” at the international reaction to their weekly singalong and are now actively investigating new forms of outreach to their local community, and building on the links that were developed in recent months.

The Sisters are well known in Sunderland for their role in education.

According to one member of the community, Sr Adrienne, the weekly singalong led to many former pupils contacting the Sisters as well as staff and parents. She recalled how, “A lot of people were driving to the convent, parking up and winding down their windows to take part in the singing; there was a real community feeling.” She described the response as “amazing”.

The Sisters have been accustomed to being active in parish and voluntary work but during the pandemic all that came to a halt and they increasingly had to use the telephone to support people who were alone and feeling isolated.

Sr Adrienne, a former French teacher, explained that the Sisters have been able to reach out to many more people who had been feeling isolated thanks to the coverage of their singalong.

“It has really struck a chord and a number of people have contacted us, who wouldn’t have done otherwise,” Sr Adrienne told the Conference of Religious of England and Wales website.

As a community they are now reflecting on the legacy of this experience which “came out of the blue!”

“We want to build on these new links – we just think God must be opening new doors to us.”

The Sisters are also active in supporting the local school with the provision of a food bank for those who are struggling in the current circumstances.

“Some people are having a really hard time and parents know they can come and get a food parcel. Because of Coronavirus we can’t get involved in the community in the way we normally would, but we feel we are reaching out through this means as well,” Sr Adrienne explained.

As to the impact of the lockdown on the community, Sr Adrienne commented, “So much has changed during lockdown. Even community life and our prayer life has taken on a new dimension. Not having Mass has meant each Sister has taken it in turn to prepare and lead services, which has been really enlightening and very creative;  we feel very blessed.”

“We have bonded more in this time and the opportunity to reflect more on Scripture has led me to see things I’ve never seen before, despite having read the words many times in the past. It’s just a different way of seeing things. We’re finding a new way of living. Things won’t be exactly as they were.”