Bishops concerned by intolerance towards immigrants 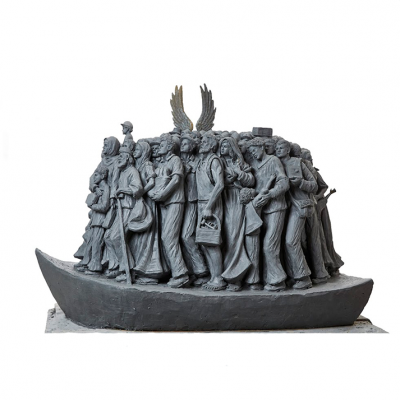 A replica of the Angels Unaware statue by Thomas P Schmalz.

The Irish bishops have expressed deep concern about “overt expressions of intolerance” towards migrants and refugees arriving in this country.

In particular, the Bishops singled out social media as a place where racism and xenophobia are especially manifest.

The expression of concern was made by the Bishops following their Autumn General Meeting in Maynooth last week and following last Sunday’s celebration of World Day of Migrants and Refugees by the global Church.

As part of that celebration, Pope Francis unveiled a new sculpture in St Peter’s Square, the first new statue installed in the Square for more than 400 years.

The 6m tall statue is the work of Canadian sculptor Timothy Schmalz. It depicts 140 refugees, representing different cultures, nationalities and epochs, all crammed aboard one small raft or boat.

Some of the figures can be identified as Hasidic Jews fleeing the Nazis, others are Poles fleeing Communism and others still are modern-day Syrians fleeing civil war.

Some of the figures are clearly happy to be starting a new life, others are weeping at the loss of the life left behind. Above the tightly jammed figures there are two angels’ wings.

Schmalz said he took his inspiration from St Paul’s Letter to the Hebrews 13:2: “Do not forget to show hospitality to strangers, for by so doing some people have shown hospitality to angels without knowing it.”

It is not known how long the statue will remain in St Peter’s Square, but a 1.5m version has been installed in the Basilica of St Paul Outside the Wall in Rome.

Pope Francis was clearly pleased with the statue when he examined it last Sunday. It was commissioned by the Vatican’s Migrants and Refugees office in 2016 and Pope Francis blessed a model of it in 2017.

Schmalz told the Canadian Broadcasting Corporation that he would like to see the statue as an advert for making migrants and refugees welcome.

In Ireland, the Bishops said in their statement, “The sculpture reminds us that throughout history vulnerable people have had to flee their homes and seek hope on farther shores. In Ireland – in our own families – we know of this only too well.”

In Maynooth, the Church leaders prayed that “in our actions as a society, we would reaffirm God’s grace in everyone – especially those of a different race, religion or nationality – and so welcome, serve and love the stranger as our neighbour”.

They continued, “In an increasingly individualised and polarised society, the needs of the other are too often seen as threats to our own levels of comfort and abundance.”

To help make Ireland a more welcoming place, the Bishops’ Council for Justice & Peace is to host a meeting of diocesan representatives to examine how local communities can support the integration of migrants and refugees into Irish society.

They said that this work will be guided by Pope Francis’s repeated assertion that the “challenges posed by contemporary migration can be summed up in four verbs: welcome, protect, promote and integrate.”