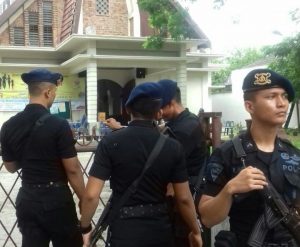 Indonesian police are investigating a suspected terror attack after a would-be suicide bomber, carrying a “hand-drawn Isis symbol” attempted to attack a Catholic priest with an axe during Mass at St Joseph’s Church in Medan, the capital of North Sumatra province.

Police spokesman, Major General Boy Rafli Amar, said the 18-year-old suspect had been sitting in a pew during a crowded Sunday Mass. Suddenly he got up and ran towards the altar.

A bomb in his backpack burst into flames without exploding.

He took an axe from his backpack and used it to attack Fr Albert Pandiangan, aged 60, before he was restrained by members of the congregation.

There were no serious casualties, but Fr Pandiangan suffered a minor injury to his hand and the attacker was also injured.

A member of the congregation told the Jakarta Post the attacker was “fidgety the whole time” during the service and “because of the weakness of the explosion, he was caught, so he got up and went to the altar, going after the priest while wielding sharp weapons.”

Timbas Ginting, a witness present in the church, told Reuters the attacker had sat with other worshippers before running toward the priest.

“There was a small explosion like fireworks and he also took out a knife as he ran toward the priest,” he said.

Rina Sari Ginting, a spokeswoman for Medan police said in a statement, “A terrorism act was carried out on Sunday morning at the Saint Joseph Catholic Church. Police are interrogating the perpetrator… and will search his house for any bomb-making materials.”

Indonesia is the world’s most populous Muslim nation.

The authorities have carried out a sustained crackdown on militant networks since the 2002 Bali bombings that killed 202 people.

Earlier this year, Fr Magnis-Suseno, a Jesuit and lecturer in philosophy at the University of Jakarta, warned of the increasing danger of a terrorist attack in the country.