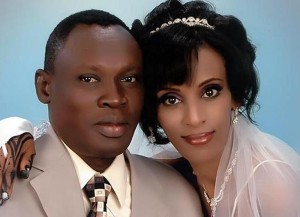 Meriam Yahia Ibrahim, the young Sudanese woman imprisoned with her child and sentenced to death for being a Christian, has given birth early.

According to local sources, Mrs Ibrahim’s husband Daniel Wani has yet to be granted permission to see his wife and newborn daughter, who are currently incarcerated in Omdurman Federal Women’s Prison along with his 20 month-old son Martin, but has been informed that both mother and baby are well.

On 22 May, Meriam Yahia Ibrahim’s lawyers lodged an appeal against the Public Order Court’s decision on 11 May to sentence Mrs Ibrahim to death for apostasy and 100 lashes for adultery.

Mrs Ibrahim was charged and sentenced for adultery and apostasy under articles 146 and 126 of Sudan’s Penal Code respectively. The Public Order Court in El Haj Yousif Khartoum, Sudan, chaired by Judge Abbas Khalifa, confirmed the sentence on 15 May, after Mrs Ibrahim refused to renounce her faith.

Mrs Ibrahim was born in western Sudan to a Sudanese Muslim father and an Ethiopian Orthodox mother. Her father left the family when she was six years old and she was subsequently brought up as a Christian by her mother. The case against Mrs Ibrahim began after Sudanese authorities were made aware of her marriage to Daniel Wani, a Christian with dual American and Sudanese citizenship.

Morning Star news reported that Mrs Ibrahim testified before the court on 4 March that she is a life-long Christian, producing her marriage certificate, where she is classified as Christian, as evidence. Three potential witnesses from western Sudan who went to court to testify of Mrs Ibrahim’s lifelong adherence to Christianity were prevented from giving evidence.

“We are pleased to hear that Mrs Ibrahim and her baby are reportedly in good health; however, we urge the authorities to ensure that Mrs Ibrahim’s husband and lawyers are granted access to see them, and that they are guaranteed medical attention,” said Mervyn Thomas, Chief Executive of Christian Solidarity Worldwide, (CSW).  “CSW continues to call upon the Sudanese authorities to annul the inhumane and unwarranted sentence given to Meriam Ibrahim, and to release her and her young children immediately.”

Mr Thomas said the charges against Mrs Ibrahim were  “a violation of her right to freedom of religion or belief, guaranteed under Sudan’s interim constitution and in the covenants to which Sudan is party.”