Students use games to promote justice in Trócaire competition 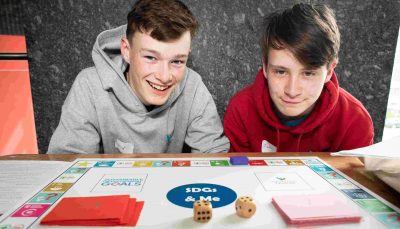 Overall winners in the Game Changers youth category: David O’Dwyer and Tom Lafferty, with their game SDGs and Me.

Move over Monopoly and Snakes and Ladders – students from across Ireland have devised a new set of table top games and video games.

More than 80 new games were entered in the Game Changers competition run by Irish aid organisation Trócaire. The competition is for young people who want to change the world and believe games are a way to do this.

Twenty-two of the games were chosen for trial at a games event in the Helix at DCU.

Entries were divided into three categories: primary, post-primary and youth.

Winner in the primary category was Around The World, a traditional board game with a dice, devised by Alex Clohessy, Jack Faherty, Nathan Hopkins and Kyle Jordan of St John of the Apostles NS in Knocknacarra, Galway. 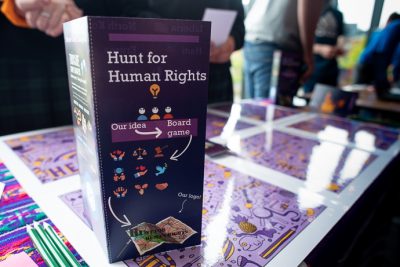 Overall winners in the youth category were David O’Dwyer and Tom Lafferty of the Youth Work Ireland Tipperary-Cashel Neighbourhood Youth Project with SDGs and Me, with the first part of the title referring to the UN sustainable Development Goals.

Using board games to promote particular messages is nothing new: the game Monopoly was originally devised in 1904 to teach about the evils of capitalism!

Table top games – which comprise both board games and card games – have been undergoing a surge in popularity in recent years. Games launched on the internet platform Kickstarter often raise in excess of $1 million for developers, promising backers copies of games that haven’t been published yet.

A website dedicated to the hobby, BoardGameGeek, lists more than 95,000 different board games – many of them ranked by aficionados.

Maybe some of the Game Changers games will go on to feature on BoardGameGeek!