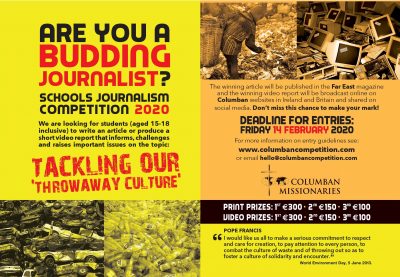 School students aged between 15 and 18 are being invited to take part in the 2020 Columban Schools Journalism competition.

This is the third year that the competition has been run and the title for 2020 is “Tackling our Throwaway Culture”.

Once again the competition has secured some high-profile judges from the world of journalism.

Two separate competitions are under way – one for students in Ireland and one in Britain; each has two categories, writing and video.

The competition encourages students to use their journalistic writing and mobile skills to look at a topical issue which is relevant to society today and resonates with Catholic social teaching.

The winning articles and videos will be announced in Columban media on 16 March 2020 and will later be published in the Far East magazine and on Columban social media.

In a new development, The Irish News is set to publish the winning print article in the Irish competition.

The “throwaway culture” is pervasive in our world today. It is strongly influenced by consumerism. The term describes a critical view of overconsumption and excessive production of short-lived or disposable items over durable goods that can be repaired.

The issue is an important one for young people, who are responding to such issues as single-use plastic, excessive packaging and waste in the fashion industry.

The judges for the Irish competition are:

William Scholes, Religious Affairs correspondent of The Irish News. He has edited the newspaper’s weekly “Faith matters” section since 2005. The Irish News will print the winning competition entry.

Liz Dodd, Home News Editor at The Tablet and a freelance travel journalist. She has written for various UK publications, including National Geographic Traveller (UK), The Sunday Times and The Daily Telegraph; and has appeared on BBC Radio Four and Five Live.

Patsy McGarry, Religious Affairs correspondent with The Irish Times. He also is the commissioning editor for articles which are published in the paper’s “Rite and Reason” column. He has worked for Independent Newspapers, the Irish Press group, Magill magazine and RTÉ.

Fr Seán McDonagh, Columban priest, eco-theologian and writer who was on mission in the Philippines for two decades. In 2006 he published Climate Change: The Challenge to Us All and more recently the commentary On Care for Our Common Home, Laudato Si’: The Encyclical of Pope Francis on the Environment.

Pope Francis, in his 2015 encyclical Laudato Si’: On Care of our Common Home, highlighted “the cry of the Earth and the cry of the poor”. He addressed the issue of our throwaway society.

“The Earth, our home, is beginning to look more and more like an immense pile of filth,” he said. In bemoaning “once beautiful landscapes … now covered with rubbish,” the Pope rebuked “a throwaway culture” where, in a consumerist mindset, goods, food and even people are discarded after their perceived use and worth wears out.

Columban Missionaries believe the issue of a “throwaway culture” raises serious moral and ethical concerns about the wasteful use of our planet’s finite resources.

Involvement in recycling projects in the Philippines, eco-education in Pakistan, and Livesimply parishes in the UK are all part of supporting work for the common good. Young people too can make a difference to promoting a sustainable future.

The schools competition in 2019 focused on “The Challenge of Climate Change” and in 2018 on “Migrants are our Neighbours”.

For more information about the 2020 Schools Journalism Competition and this year’s judges see: www.columbancompetition.com.