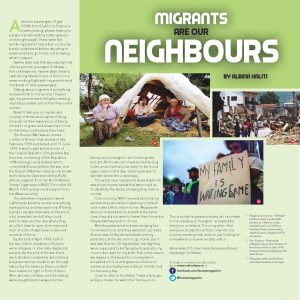 Albina Haliti’s article, which recounts how she came to be born in Ireland following her parents flight from Kosovo, was awarded first place by judges in the print category.

In her article, the 17-year-old student of Holy Family Secondary School, Newbridge, Co Kildare states, “Talking about migrants is something very personal to me as only 18 years ago my parents were refugees seeking any help possible just so that they could survive.”

She explains that the Kosovo War was an armed conflict that started in late February 1998 and lasted until 11 June 1999. By the end of April 1999, half of the two million residents of Kosovo were refugees or internally displaced.

The judges awarded first place in the video section to students Claudia O’Brien (16) and Cayleigh O’Neill (16) of Presentation Secondary School, Mitchelstown, Co Cork who creatively told the story of a Syrian refugee.

As part of the Columban Centenary (1918-2018) celebrations, students aged between 15-18 were invited to write an article or make a video on the theme ‘Migrants are our Neighbours’.

The subject matter was chosen in view of the Columbans’ long established solidarity with and ministry to migrants in Britain, Ireland and worldwide. Entries were received from around Britain and Ireland in two parallel competitions.

The print winner in Britain was a former migrant and Muslim. Sixteen-year-old Ahlaam Moledina of Bishop Challoner Catholic College in Birmingham paid tribute to the welcome and values provided in her Catholic education.

When she and her siblings came to Britain in 2010 from the United Arab Emirates, “we took consolation in the kindness of our Catholic Primary School”, she stated.

She reflected that “in the confusion of being young and uneducated and foreign, we were comforted by the repeated mantra of ‘migrants are our neighbours’ that seeped out of every RE lesson”.

One of the judges, John Vidal of The Guardian, described her piece as “a gripping personal story which successfully wove together religious and political awareness”.

The winners of the video competition for Britain, Francesca Bruno (18) and Mary Gurdin (17), filmed at St Chad’s Sanctuary.

“The interviewees did well in reminding us of the terrible plight of refugees and asking us to compare our privileged lives in the UK with their lives of extreme and enforced hardship” said judge Columban Fr Tom O’Reilly.

This is the winning video entry for Ireland.