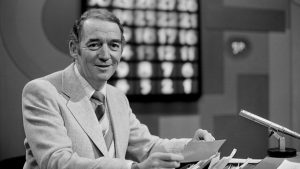 The funeral of Bunny Carr will take place this morning at St Fintan’s Church in Sutton, Co Dublin.

The much-loved former RTE television presenter, charity worker and director of the Catholic Communications Centre, was baptised Bernard. He was given the nickname “Bunny” – because he was said to have big ears – by one of the nuns who taught him in primary school.

After completing his education, he became a bank clerk but when RTE television was founded Mr Carr successfully auditioned for the role of presenter in 1962. He quickly became a popular TV personality. The common Irish expression of surprise, “stop the lights”, was derived from a catchphrase used in the quiz show Quicksilver, which Carr presented from 1965 to 1981.

He won a Jacobs broadcasting award for the programme Teen Talk and also presented a current affairs show, The Politicians. But the programme Mr Carr was most associated with was Going Strong, an afternoon magazine show aimed at older people. Going Strong promoted the concept of “active retirement” before the phrase had even been coined.

In 1973, he formed the PR agency Carr Communications which specialised in giving public relations advice to Ireland’s senior politicians. He also became director of the Catholic Communications Centre, providing media training to Ireland’s bishops and priests.

During the 1980s, he became the public face of the charity Gorta and campaigned for donations to provide famine relief.

Mr Carr is predeceased by his wife Joan, with whom he had three children Carolyn, Philomena and Alan. He died peacefully, aged 91, surrounded by his loving family.