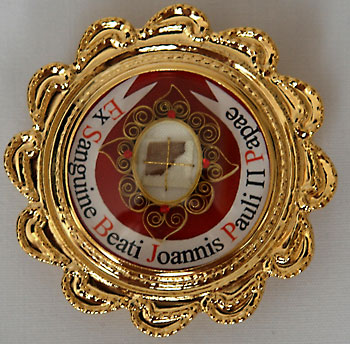 The precious relic of Blessed John Paul II which was stolen last week from a church in Italy has been recovered by Italian police.

At a press conference on Friday afternoon in L’Aquila, which lies east of Rome, police and church officials informed the media that a piece of cloth, stained with the blood of the late Pontiff, had been discovered in a garage belonging to two men who admitted to stealing the reliquary.

The relic and a gold crucifix were stolen last weekend from the small village church of San Pietro della Ienca which is located in the Abruzzi mountains, 13 miles north of L’Aquila, where John Paul II used to regularly go skiing.

Cardinal Stanislaw Dziwisz of Krakow, who served as Blessed John Paul’s personal secretary during his pontificate, gave the relic to the chapel in recognition of the late Pope’s many visits there.

On Thursday morning, police questioned three men in their late teens who had a history of petty theft and drug use. The trio said they didn’t realise the value of what they had stolen.

Many were mystified by the robbery as no money was stolen, leading some to speculate possible satanic motives.

Bishop Giovanni D’Ercole, auxiliary bishop of L’Aquila, told reporters he had pieced together the reliquary and the cloth after police found them in pieces on successive days.

“I think John Paul has forgiven them. I think we have to do the same,” Bishop D’Ercole said as he thanked those “who have worked to recover the relic.”

The bishop said the postage-stamp-sized piece of fabric, which was cut from the clothing Blessed John Paul was wearing when he was shot 13 May 1981, was almost intact, and was missing only a few gold threads.

The previous day, the thieves turned over an empty iron reliquary, along with a stolen cross, buried on the grounds of a drug treatment facility in the city of L’Aquila.

They said they had removed and discarded the relic itself because they considered it worthless.