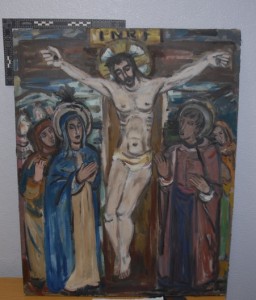 One of the stolen paintings

Gardaí in Tullamore have recovered six valuable paintings from a series of stations of the cross which were stolen from a Galway church in 2013.

The parish priest, who was devastated at the theft of the oil paintings by the renowned artist Evie Hone, expressed his joy on hearing that they were recovered during a planned operation in Edenderry, Co Offaly on Tuesday (12 April).

“I had so many phone calls last night when the news broke, from people delighted to hear the good news,” said Fr Martin McNamara, PP of Kiltullagh, Co Galway.

The discovery was made by Gardaí attached to Edenderry and Tullamore during a search of wasteland near Edenderry.

The paintings have been removed from the scene to Tullamore Garda Station for forensic and technical examination.

No one was arrested during this phase of the investigation and enquiries are ongoing. 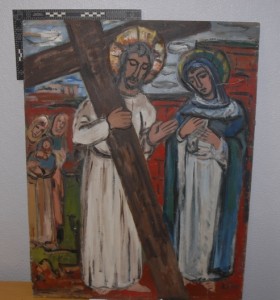 Fr Martin McNamara said that the paintings are in good condition but need some work.

“The frames were missing so we’ll have to get frames made and then we will decide (whether to hang them in the church again),” he said on RTE Radio 1 News.

The stolen paintings included the 3rd, 4th, 5th, 10th, 11th and 12th stations out of the set of 14 stations of the cross at the Church of St Peter and Paul at Kiltullagh, near Athenry.

In June 2013, Fr McNamara noticed the paintings were missing when he went to lock up the church which is left open during the day for people to pay a visit.

Speaking to Miriam O’Callaghan on RTE Radio at the time he expressed his shock and sorrow.

“I was hardly able to say Mass I was so shocked,” he said.

Mirriam O Callaghan tried to reassure Fr McNamara and later expressed her concern about how devastated he was.

People used to visit from all over the world to see the paintings which have hung on the walls of the church since 1946 and were never touched. The paintings were commissioned by a local benefactor.

Evie Hone was born in Dublin. A Cubist painter and stained glass artist she was one of the earliest abstract painters in the history of Irish art.

One of her most important works was the East Window for the Chapel at Eton College.

She worked mainly in stained glass, so her paintings are quite rare. Some early sketches for the Stations in Kiltullagh fetched over €40,000 at auction the year before the theft.