Home > Featured > “There is still a yearning for family” – Cardinal Schönborn 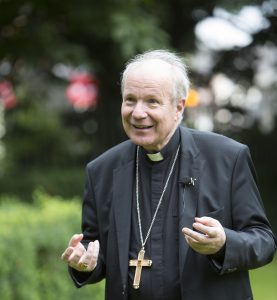 Speaking at the conference, ‘Let’s Talk Family: Let’s Be Family’, Cardinal Christoph Schönborn of Vienna said that despite all the distractions of society today, there is still a yearning for family.

Conference organiser Fr Eamonn Fitzgibbon, Director of the Institute for Pastoral Studies at Mary Immaculate College (MIC), said Cardinal Schönborn had “kicked off a special year-long journey for us in Ireland that leads to the World Meeting of Families next year when we hope we will have Pope Francis with us in person.”

He stressed that Cardinal Schönborn is of one mind with the Pope when it comes to one of the cornerstones of his papacy, the rehabilitation of family.

The 72-year-old Austrian prelate was in Ireland to address the conference which was held at Mary Immaculate College and is the first major event to be held as part of the build-up to the World Meeting of Families next year in Ireland.

A packed auditorium of over 300 people heard Cardinal Schönborn give his interpretation of Pope Francis’ post-synodal exhortation Amoris Laetitia.

The Cardinal said people should not be discouraged about the future of the family despite the many social and economic threats and policies which disregard the family.

Asked by journalists about his own personal experience of marriage breakdown between his parents, he acknowledged, “Yes – dramas happen in life; that is life. What Pope Francis does in Amoris Laetitia is encourage the means of how to overcome crises. He is a master in marriage counselling despite the fact that he is not married. Certainly he has been close to people his whole life and to their pains and joys.”

“I find Amoris Laetitia is a fantastic instrument to reconsider separation and divorce and to give motives for patience to overcome crises. Pope Francis is very clear. He says it doesn’t help to come with an authoritarian obligation, you must stay together.” 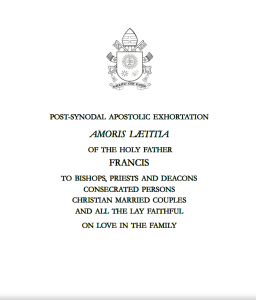 “No, he gives good reasons why you try the best to stay together and if you can’t then at least behave in a way that the damages for your children, for your surroundings and your family are as small as possible.”

“Very often Church speech is very abstract. It’s ideal but sometimes idealistic. Pope Francis speaks so closely to reality and you feel that he knows what he is speaking about when he speaks about families in great poverty. You can feel that he speaks about what he has seen hundreds of times in his priestly and bishop’s life.”

He said the document was helping the Church to look “closely, and in a compassionate and merciful way, without judging but discerning. This is the great teaching of Amoris Laetitia and why it has such a positive echo for many”.

Organiser Fr Eamonn Fitzgibbon said the packed attendance at the conference, with people travelling from as far afield as Donegal, showed the commitment there is to family but also the desire to hear from the very person selected by Pope Francis to present Amoris Laetitia.

“They got an insight into a more compassionate Church, a Church that will be compassionate to the complexities of family rather than be confrontational, as it certainly was seen to be in the past. The fact that Cardinal Schönborn’s own parents divorced when he was young means that he has the empathy for those complexities; can relate to them and be related to. Pope Francis chose wisely not only in a theological sense but also in a real sense by picking Cardinal Schönborn for this key role.”

Delegate Gemma Mulligan from Tullaran, Co Kilkenny said that there was a freshness to the new approach to family.

“All of us, if not in our own family, know somebody in a broken relationship, a broken marriage; situations where people feel they are no longer part of the Church or can’t be part of the Church. I think Amoris Laetitia gives them an opportunity to see that they are still part of this family and the Church is genuine in reaching out. I also feel it is very fresh, it’s a different voice than what we are used to hearing.

“He [Cardinal Schönborn] is wonderful to listen to and an excellent communicator. I really enjoyed listening to him. He has a wonderful warm face, like Pope Francis and a great sense of humour. He really explained the text. He kept saying to us that he could talk about it until midnight but would not do that to us. But I would have listened to him until midnight.”

Rose O’Connor of Our Lady Help of Christians, Milford, Limerick said she had been “really inspired by Cardinal Schönborn’s talk.

“The thing I was left with was a great sense of hope for people that maybe are feeling a distance from the Church, feeling estranged because of their particular situations. What I took from it is that there is an ideal that we all strive to but most of us, with the best will in the world, will fall short of that and what they are saying is there is compassion in the Church for those people.”