Gay Byrne interview with Stephen Fry up for award 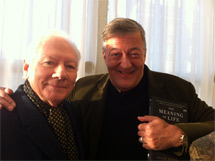 An interview in which Stephen Fry told Gay Byrne that God is “utterly evil” has been shortlisted for an award which celebrates the best religious/spiritual radio, TV and online content.

The UK-based 2016 Sandford St Martin Awards has included ‘The Meaning Of Life With Gay Byrne’ under its interview section.

In the programme, which was produced by RTÉ Religious Programmes for RTÉ One, Stephen Fry responds to Gay Byrne’s question about what he would say to God if he met him at the “pearly gates”.

Stephen Fry replied, “I’ll say: bone cancer in children, what’s that about? How dare you. How dare you create a world in which there is such misery that is not our fault. It’s not right. It’s utterly, utterly evil. Why should I respect a capricious, mean-minded, stupid God who creates a world which is so full of injustice and pain? That’s what I would say.”

Another Irish programme nominated was Baz: The Lost Muslim (Part 2) made by Brown Bread Films Ltd for RTÉ2.

In 2015 one award winner under the TV section was One Million Dubliners made by Underground Films for RTÉ 1 which explored Glasnevin Cemetery.

The Rt Rev Nick Baines, Bishop of Leeds and Chair of the Sandford St Martin Trust, spoke at the announcement of the awards, about the importance of good religious programming.

He expressed concern about the BBC Charter renewal and rumours regarding a possible privatisation of Channel 4.

“The world needs to be interpreted, not just reported. And to do this effectively, the lens of those being reported to needs to be looked through and understood.”

“This means that religion needs to be taken more seriously by the BBC in its future shape and remit.  Religion is a primary motivator of individuals and communities, inspiring and informing their political, economic, ethical and social behavior,” he said. 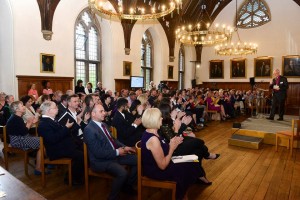 Lyse Doucet, the BBC’s Chief International Correspondent and a former recipient of the Sandford St Martin Trustees Award commented, “Religion, and belief in general, is one of the most important threads in some of the big issues of our time.”

“People’s faith is, in some places, divisive and destructive but in others it is a source of strength and solidarity. The Awards recognize the growing importance of understanding all faiths and people of no faith.”

Winners of the 2016 awards will be announced at a special ceremony at Lambeth Palace on 8 June 2016.

Other nominees announced earlier this week include Tony Jordan’s Eastenders-meets-the-Old-Testament version of The Ark, and Lyse Doucet’s documentary Children of the Gaza War.

Another shortlisted programme is the moving broadcast from the so-called ‘Jungle’ refugee camp in Calais by Songs Of Praise by for BBC One. 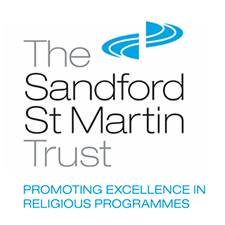 2016 is the first year for the new Interview of the Year Award category for a broadcast TV, Radio or online interview that explores religion, spirituality or ethics from a personal perspective.

Referring to the new category, Sandford St Martin trustee and broadcaster Roger Bolton said, “We recognise that it is difficult for non-national network programmes to compete against the usually better resourced national output.”

“The Interview of the Year Award aims to give everyone an equal chance. The focus will not be on the eminence of the interviewee or interviewer, but on the quality of the interview, the religious and ethical expertise and the sensitivity it displays.”

The 2016 Awards, worth around £10,000, will be presented at a ceremony attended by leading broadcasters, journalists and programme-makers as well as representatives of different faiths.