The infographic features on the CSO Facebook page and triggers the special Pope emoji or symbol on Twitter. A phenomenon of this modern age is the boomerang generation who return to their parents’ home, or even those who never leave. The infographic shows that 458,874 adult children are living at home – 58.6 per cent of these are male and 41.4 per cent are female. 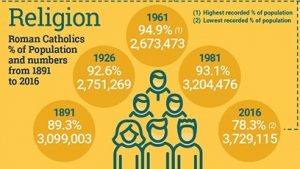 When it comes to the urban rural divide, the figures show that 88.6 per cent of the population in Offaly is Catholic and in four other counties the figure is above 87 per cent. In the urban setting the lowest percentage of Catholics is in Dun Laoghaire-Rathdown at 69.8 per cent and Dublin city at 70 per cent, while three other towns are under 75 per cent.

The average number of children in families is 1.38 across the state, but when divided into urban and rural, this is 1.34 and 1.45 respectively.

Separately, WMOF2018 organisers have issued their own statistics which show that:

– 6,000 young people under the age of 18 will be present for the Pastoral Congress.

– 82,500 tickets are booked for the Festival of Families with Pope Francis on Saturday 25 August.

– 45,000 tickets are booked for the visit of Pope Francis to Knock Shrine to pray for families. These tickets were booked out in four hours.

Families are coming to Ireland for the WMOF2018 from 116 different countries, and 15,000 people from overseas will attend WMOF2018 events.

Statistics on food at the Phoenix Park Mass show that:
– There will be 150 food and drink outlets in 10 service areas around the outside of the Mass location in the Phoenix Park serving quick-serve convenience food for purchase.
– There will be around 800 staff working on the food and drink outlets who will need to be on site by 6 a.m.
– If half of the people there have a cup of tea or coffee, 31,250 litres of milk will be used.
– About 25,000 sliced pans are expected to be used for sandwiches.
– 72,000 bottles of water will be used for crew alone – this does not include attendees.