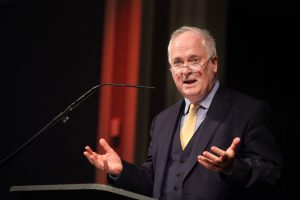 Former Taoiseach John Bruton has said it is never compassionate to end the life of an unborn baby.

In a speech delivered at the Irish Catholic Doctors’ Learning Network Annual Conference in Swords, Co. Dublin, on Saturday, the former leader of Fine Gael hit out at advocates of the abortion legislation currently going through the Oireachtas.

In his address, he underlined that a value system is what helps us make often very difficult decisions as individuals and as a society.

It provides the basis for a hierarchy of rights and responsibilities. He said in real-life situations some rights have to get priority over others.

“The pro-life case is that the right to life is the primary right, because, without life, one simply cannot exercise any of the other rights. It flows from … the primary responsibility, of the state, and of each of us as citizens … to protect life,” John Bruton said.

The former EU ambassador to Washington stressed that the primary responsibility of the state, and of each of its citizens, is to protect life.

“From earliest times the primary function of states has been the protection of the lives of its citizens. That is why a state has an army, a police service, a fire service and a health service … the core function of each is to protect life.

“So, when a state, as the Irish state is now doing, turns itself to facilitating, and paying for, the taking of life, something really profound is happening. As far as Irish humans before birth are concerned, the Irish state will no longer protect their right to live, and indeed, in some circumstances, will pay the costs involved in ending their lives. In this sense the fundamental, life protecting, function of the Irish state is being changed.”

He also referred to a letter sent by lawyer William Binchy, which was published by the Irish Times last Monday week. In it, Professor Binchy attempted to discern the underlying political philosophy of the Minister for Health and of the TDs who have supported the Minister’s legislation.

Mr Bruton said he would like to ask them three questions: First of all, if they accept that protecting a right to life has been a fundamental function of the Irish State since its foundation and, if so, why are they changing it?

Secondly, if they placed other rights, such as a right to bodily integrity, ahead of the right to life, and, if so, how did they justify that?

Lastly, whether they recognise a life before birth as a human with human rights, at all, and if so why do they deny it a right to live?

On the matter of protecting freedom of conscience and religious freedom, John Bruton told conference delegates that no person, medically qualified or otherwise, should be forced by the threat to his/her employment, or of criminal sanctions, to be involved in the ending of a human life, against his or her religious convictions.

Referring to Article 44.2.1 of the Constitution, he said it guarantees, subject to public order and morality, the “free … practice of religion”.

He would argue that “free practice of religion” is not confined to what one does inside the walls of a church, mosque or synagogue, but extends to daily life.

“A law that forces someone to take part in, or to facilitate, an action that that person believes is contrary to a deeply held religious conviction could be in conflict with Article 44.2.1,” he highlighted.

John Bruton added that the abortion bill before the Oireachtas recognises this, in so far as it says no doctor, nurse of midwife shall be compelled to “participate” in carrying out an abortion.

However, other hospital staff are not granted any such protection for their consciences, even though their participation may be also crucial to the ending of the life of the baby.

“They too could be considered to be aiding and abetting an abortion, but they are to enjoy no protection for their consciences. That aspect of the bill should be changed. The concept of “aiding and abetting” a crime is well understood in Irish law.”

The bill requires a doctor, who has a conscientious objection to doing an abortion herself, to “make arrangements to transfer the care” of the woman to a doctor who will do it.

This, Mr Bruton said, could be construed as aiding and abetting the abortion, and there is no conscience clause here either.

“If they fail to make the referral, they will be committing a criminal offence. I fear that doctors who are known to oppose abortion will be targeted under this clause by people wishing to catch them out and put them under threat of criminal prosecution because of their religious or human rights beliefs.”

He also noted that the referendum decision sat “very uneasily beside the deep and genuine concern, expressed in all quarters, for the welfare of boys and girls AFTER they have been born, and the strong laws we have passed to protect them.

“It also sits uneasily beside the expressions of concern about where and how babies, who died fifty years ago in Mother and Baby homes, were buried.”

He questioned where, and how, will the supposedly non ‘viable’ babies who will be aborted in Irish hospital be buried. “What care will church and state take to ensure that they are buried with dignity? Or will they be treated as mere hospital waste?”

Human Rights organisations came in for criticism too.

Noting that they pride themselves in speaking up for the rights of those who cannot speak for themselves, or for those whose voices are not heard because they are politically powerless or simply unpopular, he added that in Ireland in the recent referendum, that did not really happen.

“Irish human rights organisations ignored unborn children as if they were ‘unpersons’.

“When the unborn child has its life deliberately ended, it is not presented as a victim. Apparently, it is only victims who survive who count. But every abortion involves a death, a victim. A victim that never gets the chance to become a survivor! For me, every person counts, whether the person be born or unborn, visible or invisible, mute or eloquent, here or abroad.”