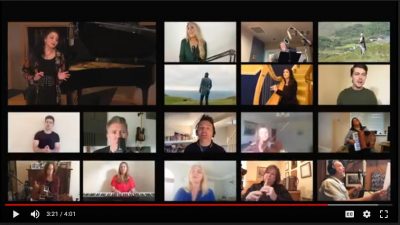 A number of well-known singers and musicians have come together to collaborate on a song of hope and friendship which is dedicated to all who have lost loved ones during the Covid-19 pandemic and which will aid the Mater Hospital Foundation in Dublin.

‘Anthem Of Hope, May The Road Rise’ has been released online as Ireland emerges from lockdown.

An Irish-American collaboration in video and song, the proceeds from downloads will go to the Mater Foundation.

The song was written by Nathan Carter and John Farry and is based on the ancient Irish blessing ‘Go n-éirí an bóthar leat’.

Speaking to CatholicIreland.net, John Farry said, “It’s quite symbolic that John Carter Cash, the son of the late Johnny Cash, who wrote ‘The Forty Shades Of Green’ was the first act to say yes to this collaborative project.”

Nathan Carter described ‘May the Road Rise to Meet You’ as “a lovely Irish blessing”. He said the sincerity of the words had struck him and John Farry.

“It’s a blessing that has been passed down by generations of Irish families and we felt it lent itself really well to an anthem-style song.”

“Sadly, Ireland has lost far too many wonderful people too soon and their families have suffered the saddest loss. It’s a plight that is repeated across the world and the scale is almost too difficult to even comprehend.”

“Lyrics like those in the song have taken on a whole new meaning and we received so many touching messages from people who have found a little comfort in them. Many who have been painfully separated from family and friends, some living really far away from home, and very sadly, those who mourn the loss of the people they love.”

Nathan Carter released ‘May the Road Rise’ on 1st of January 2020. He did not know then how significant the lyrics would become in a few short weeks.

Ringing in the new decade with sentiments of hope and friendship, the song was penned by the singer and John Farry, his manager, and inspired by the traditional Irish blessing. Their wish was that listeners would be stirred to start the New Year on a positive note.

Soon after its release, the song took on a more significant meaning and the lyrics have gone on to provide hope, comfort and a sense of belonging to people across the globe.

“We released it on the first day of January and the reaction to the song was brilliant. People were enjoying it as they celebrated all the good intentions that come with new beginnings,” Nathan Carter explained.

“As we all know, since January the world has changed beyond recognition. In times like these, people do turn to music for comfort, distraction and hope. As musicians, there isn’t much we can do in a health crisis like this, but if our songs are of some help to even a single person, that makes it all worthwhile.”

As Ireland and the world begins to slowly rebuild and emerge from the crisis, Nathan has joined with fellow musicians to release a new, transatlantic Irish-American version of the song.

“Like the blessing, links between Ireland and America go back for generations and after a period of such separation from our friends across the Atlantic, this felt like a good way to remember this period through voices and friends coming together again. Their support in putting this together has been incredible and I want to thank every one of them for backing this project so wholeheartedly,” Nathan Carter explained.

“We all know that no song can ever erase what’s happened in the world, but in some way, we hope to use our music to shine a little light and hope” he said.

The song can be viewed here: https://drive.google.com/file/d/1m7vAodUF0djjPTwadWOS4GF3ZXG6I4fu/view?usp=sharing