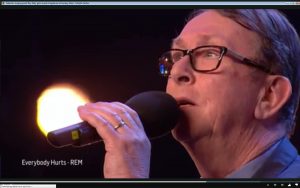 Fr Ray, who is parish priest of Oldcastle, Co. Meath, wowed the panel of judges comprising Simon Cowell, David Walliams, Alesha Dixon and Amanda Holden with his version of REM’s song ‘Everybody Hurts’.

Fr Ray told the Anglo Celt newspaper last week that he picked that song because it was a personal favourite. “It’s a song that’s near and dear to my heart,” he said. “I suppose being a priest, you get in touch with a lot of pain and joy and happiness as well so I feel it’s a song that I can relate to.”

Certainly, the performance touched the heart of the Britain’s Got Talent judges, with Simon Cowell saying it was one of his favourite auditions for the show, which featured a great bit of banter between Simon and Fr Ray. Simon asked the parish priest if he performed exorcisms and Fr Ray jokingly offered to do one on David Walliams then and there.

When Simon asked Fr Ray why he had entered the television show, the clerical crooner replied: “I thought I would like to be the first singing priest to win Britain’s Got Talent.”

Previously, Fr Ray was a big hit on YouTube when he was featured singing a modified version of Leonard Cohen’s song ‘Hallelujah’ during the wedding Mass of Leah and Chris O’Kane in 2014.

That video received more than 34 million views before record company Sony, who own the rights for the song, asked YouTube to remove the song. However, other versions of that rendition have since been uploaded on YouTube.

On Saturday night, Fr Ray got four ‘Yes’ votes from the judges, so he is through to the next round of Britain’s Got Talent. And reaction in St Brigid’s, Oldcastle, has been equally positive, with parishioners giving the priest a round of applause at the end of yesterday’s Sunday Mass.