Home > News > Much at stake at upcoming synod on the family

Much at stake at upcoming synod on the family 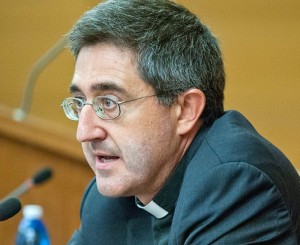 Prof Fr. Jose Granados Vice President of the John Paul II Institute of Studies on Marriage and the Family

Much is at stake in the upcoming synod on the family because the Church learns who she is by looking at the family.

Addressing journalists at the recent Church up Close conference in Rome, Prof Fr Jose Granados, Vice President of the John Paul II Institute of Studies on Marriage and the Family, said there were three ways of looking at the family: as a problem, a resource or as an apostle.

Too often the family is seen as a problem, said Prof Granados.

When the family is separated from relationships and society it becomes like a beached whale.

In a society, where all that counts is the individual, the family can often be seen merely as an emotional refuge.

“This is a diminished role,” he said. The family seen in this way is something private and no one is allowed to ‘meddle’ in it.

“Sociologists talk of liquid love.  If you define love as an emotion, you can’t promise ‘forever’ even if emotions are important for the Church.”

With secularisation, the family “lost its connection with the sacred”, he said.

“Sexuality always  had the dimension of contact with the sacred but with the sexual revolution this was lost.” In the past, the marriage of a man and a woman was rooted in the cosmos: in the Song of Songs, the bridegroom compared his beloved to nature and she compared  his body to a temple.

“Now the lack of meaning for the body, leads to self gratification.  Sexuality is made an absolute and is all pervasive” he said.

This was in sharp contrast to Pope John Paul II’s theology of the body where “sexuality promises fulfilment because it is a true encounter with the other person”.

The challenge for the Church is to show the family as a resource and most importantly as an apostle, he said.

“Sometimes we think that because  we lost religious faith we lost the family. Mary Eberstadt says it is also the other way around: when you lose family, you lose faith. If you don’t experience love as a mystery, or have the experience of being father and making promises for the future, how can you trust in God’s Providence?” asked Prof Granados.

The family and the Church go together.  Vatican II proposed the family as a domestic church, made of relationships to “announce God’s love.”

The family is a resource, said Prof Granados as it is in the family that people learn who they are and therein lies the beginning of society.

It is also a school of promise, he said, which means trusting in the future.

“Society needs to trust in promise, to say the future will not change because you gave your word. If the love of a man and a woman is based on a strong promise, the children in turn will learn it is possible to promise and to trust.”

All church ministry is family ministry, said Prof Granados, it is not a part of church ministry. “The family touches everything the Church does. The flourishing of the Church and society passes through the family,” but, he added, it is important to accompany marriages, especially in the first five years.

Families need to help other families. We should not think of the family as the object of care, but the subject of care, [those who do the caring], he said. “It has the resources to evangelise.”

He recommended a strong co-operation  between priests and couples for this ministry.

The two-week synod on the family begins Sunday and runs until 19th October 2014. It brings together more than 250 people, mostly bishops and thirteen married couples.