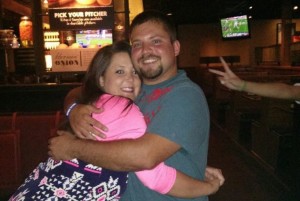 Ashley McIntyre volunteered to give her kidney to Danny Robinson, a man she had never met, and he and she fell in love and now are the perfect love match.

A young woman who answered an appeal for a kidney donor for a man who was having dialysis for 12 hours a week to keep him alive will marry him.

His kidneys had failed due to Berger’s disease.

That was just one of a number of terrible things to have happened to Danny Robinson. His house burned down on Christmas Day 2011 and his father died of brain cancer a year later.

When she heard the appeal for an organ donor, Ashley McIntyre realised that she was type-O and she didn’t have any health problems and so she volunteered to donate one of her kidneys.

Tests proved that her organ was a match for Danny and the surgery was set for April 2014.

Only one percent of living kidney donations are from strangers.

The organ donor and the recipient of her kidney met the month before the operation and kept in touch with texts and phone calls.

In May last year, a month after the successful operation, they started dating.

“As soon as we started dating – not long after that – we realised this was it,” Ashley McIntyre recalled.

Danny Robinson proposed to her on Christmas Day and the couple are expecting their first child, a baby girl, in June.

When they announced their engagement on Facebook, friends commented that the story of their relationship sounded “straight out of a book”.

Ms McIntyre told the Courier-Journal: “I never in a million years imagined this would happen…it was a whirlwind.”

The couple hope their story will inspire people to consider donating their organs.

“I know being a living organ donor is not possible for a lot of people,” McIntyre said.

“But it’s something to just think about. And even if it’s not an option, people can put on their license that they will donate after death. It’s just kind of a human thing, something (to) do for another person that could change their life.”

While they haven’t yet set a date for the wedding, for now the couple are planning their future and looking forward to meeting their daughter, buying a home and eventually having more children.

If you would like to celebrate St Valentine’s Day, why not reflect with the Saint where his relics rest in Dublin.

For the first time ever, Mass from Whitefriar Street in Dublin will be broadcast live on St Valentine’s Day at 3pm to mark the Saint’s feast day.

Loved-up couples are invited to join the service online by tuning into www.churchservices.tv/whitefriarstreet or view the relics live online at the same web address.