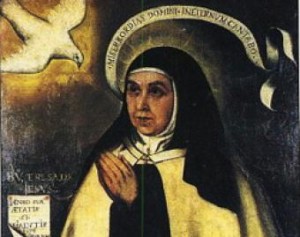 Pope Francis has described the life of St Teresa of Avila as characterised by “total self-giving to God” and suggested that this “great treasure” could help renew consecrated life today.

The Pope made his comments on St Teresa’s witness in a letter issued on Saturday to the Superior General of the Order of Discalced Carmelites, Fr Xavier Cannistrà, to mark the occasion of the 500th anniversary of the Saint’s birth.

The Spanish nun, mystic and reformer of the Carmelite Order was born 28 March 1515.

Also known as St Teresa of Jesus, her writings are among the classics of Christian spirituality and mysticism. Pope Paul VI named her a Doctor of the Church in 1970.

Her best known spiritual work is ‘The Interior Castle’.

In his letter to the Carmelite Superior General, Pope Francis said St Teresa left “a great treasure to renew consecrated life today, full of concrete proposals, ways and methods to pray” that always lead one back to Jesus and “constitute a genuine school to grow in love for God and neighbour.”

The Pope described St Teresa as “primarily a teacher of prayer.”

“Teresa’s prayer was not reserved only to one space or to one time of day; it arose spontaneously in the most diverse occasions,” he said. “She was convinced of the value of continuous prayer, even if it was not always perfect.”

“The Saint asks us to be steadfast, faithful, even in times of dryness, personal difficulties or urgent needs that call us,” the Pontiff continued.

He added that St Teresa knew the importance of authentic community life and that “neither prayer nor mission” can be sustained without it.

Consequently, she built monasteries characterised by fraternity and warned her sisters of the danger of individualism, as well as gossip, jealousy and criticism “which severely damage relationships with others,” the Pope said.

“With these noble roots, Teresian communities are called to become houses of communion,” said the Pope, “capable of witnessing to fraternal love and to the motherhood of the Church, presenting to the Lord the needs of the world, torn by divisions and wars.”