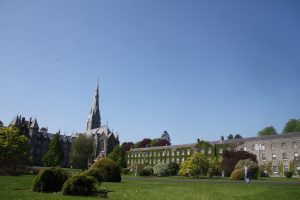 As part of the continuing development of St Patrick’s College, Maynooth, the college’s trustees have appointed Fr Tomás Surlis as Pro-Rector of the Seminary for the next five years.

The appointment is part of a revision of the governance structures of the college, says Archbishop Eamon Martin of Armagh, who is chairman of the trustees. The future vision for the college is that there would be a greater distinction between the college’s role as Ireland’s national seminary and the college’s role as a pontifical university offering courses in theology, philosophy and the arts.

“Father Surlis brings rich experience to this new responsibility and is well equipped to lead the formation community at the college,” said the Archbishop.

Born in Tubbercurry, Co. Sligo, Fr Surlis is a priest of the Achonry diocese. Before studying for the priesthood at Maynooth, he trained as a catechist and taught religion and english for four years in Coláiste Iognáid, Galway.

From 2006 to 2010 he completed a doctorate in dogmatic theology in the Pontifical Gregorian University Rome. On his return to Ireland, he was appointed to the parish of Gurteen, Co. Sligo, and Diocesan Advisor for Post-Primary Religious Education for the dioceses of Achonry and Killala. He was also appointed as Director of Formation for the Permanent Diaconate in the diocese of Achonry. In 2011 he was appointed as President and Principal Teacher of Saint Nathy’s College, Ballaghaderreen, and he served there until March last year. He then took up an appointment as director of formation and lecturer in theology and education in Saint Patrick’s College, Maynooth, last August.

This is the second major appointment at Maynooth in the space of a year – last June, the trustees appointed Fr Michael Mullaney as president of the college, which was founded in 1795.

One of the reasons for these latest developments is that the trustees must implement the vision for priestly formation set out in the new universal norms, The Gift of the Priestly Vocation, published by the Congregation for the Clergy in December 2016.

Archbishop Martin said: “The trustees are firmly committed to the college as a key contributor to the future of the Church in Ireland as it prepares both clergy and lay people to fully exercise their baptismal calling and bring their gifts to the service of God’s people.”