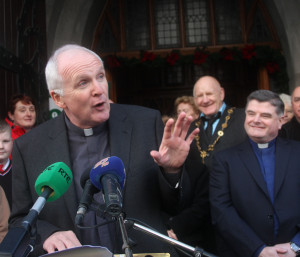 The contribution of one of Limerick’s foremost schools to the Irish sporting and political worlds has been recognised by the newly installed Bishop of Limerick in a tribute to mark a special milestone in the school’s history.

Fifty years ago St Munchin’s College reopened at its new location in Corbally.

Speaking at the College on Wednesday, Bishop Brendan Leahy noted that on the same day that Martin Luther King was making his ‘I have a dream’ speech in the US, staff and students from St Munchin’s watched the then Minister for Education and future president of Ireland, Dr Patrick Hillery, President Eamon De Valera and Bishop Henry Murphy of Limerick open the new school building.

In his homily, Bishop Leahy paid tribute to Limerick’s oldest school and the many sporting stars it has produced including rugby internationals Keith Earls, Donnacha Ryan and Conor Murray as well as the captain of the Limerick’s hurling team, Donal O’Grady.

He said the school had tried to foster a desire among its students to follow their dreams and hopes.

This was apparent in past pupils who were members of the Munster rugby squad as well as those who became TDs, including Kieran O’Donnell and Niall Collins, while Tim O’Connor had become very involved in the Northern Ireland peace process. Several of the past pupils became priests for the diocese of Limerick.

St Munchin’s College is a diocesan voluntary Catholic secondary school for boys under the patronage of the Bishop of Limerick.

The college, under the patronage of St Munchin, was founded by Most Rev John Young, Bishop of Limerick, in 1796. It was relocated to Corbally by Bishop Henry Murphy, who laid the foundation stone of the new college on 28 April 1960.

The College motto is ‘Veritas in Caritate’ which is taken from the Letter of St Paul to the Ephesians: ‘If we live by the truth and in love, we shall grow in all ways.’

Congratulating the college on the recent appointment of its first lay principal, David Quilter, Bishop Leahy asked what dreams and hopes might be put into a time-capsule for the school for the future.

Referring to a new stage in the school’s history, he cited the recent tradition of getting First Year students to fill out time capsules with letters to themselves outlining their dreams and hopes for the future.

Asking what dreams and hopes might be put into a time-capsule for the school itself in the future, Bishop Leahy continued, “Why not aim to make this school a place where it is ‘cool’ to believe in God?” 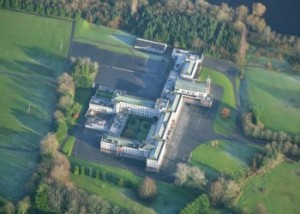 Admitting he was split down the middle over Sunday’s All-Ireland football semi-final having been raised between Dublin and Kerry, the Bishop paid tribute to Dublin’s centre back, Ger Brennan, whom he described as “probably the most physical and hardened of all of their players.”

“Ger Brennan, has spoken openly about his faith and belief in God. Indeed he is on record as saying that one of his goals in life, along with football success, is deepening his relationship with God,” the Bishop commented.

“Is Ger Brennan cool? You might not think so if you were a Kerry fan watching his tackle on Declan O’Sullivan in the All-Ireland final two years ago,” he quipped and then added that Brennan had conviction and one of his convictions was in God.

He also cited other international stage and sports stars who happily declare their faith in God, including actor Mark Wahlberg, “who found redemption in Christ which enabled him turn away from his difficult youth, being a member of a gang in Boston.” In addition, he praised Michael Jordan, the famous basketball player, and soccer stars Kaka, Ronaldo, and Pele.

“Believing in Jesus is not just about going to Mass and it’s not about saying prayers, though that’s important,” he warned and joked, “ – look at Donnacha O’Callaghan saying his prayers before and after matches!”

After Mass on Wednesday, a special monument designed and constructed by St Munchin’s current Transition Year students was unveiled.