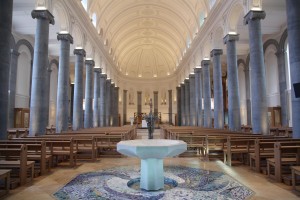 St Mel’s Cathedral in Longford has been voted Ireland’s ‘Building Project of the Year’ at the CMG Irish Building and Design Awards held in Dublin.

The cathedral which was gutted by fire on Christmas Eve in 2009 was completely redeveloped and was re-opened in Christmas week 2014.

The reconstruction of St Mel’s created up to 100 jobs and contributed an estimated €7.5m to the State’s tax revenues.

In total, €30m was spent on the project, with the majority coming from the church’s insurers, Alliance.

Another €1m was donated in voluntary funds.

On the day of the reopening, Colm Redmond, the lead architect, described the completed work as “a remarkable achievement”.

Speaking about award, St Mel’s parish priest, Fr Brendan O’Sullivan, said he was “absolutely thrilled the work of the design team had been recognised” and that the reopening has been a “great blessing” and “uplifting moment” for the diocese of Ardagh and Clonmacnois. 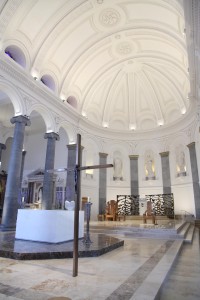 He added, “thousands of people have filed through already from all over the country and we have a lot of tour groups booked in over the next couple of months, which is absolutely marvellous.”

The awards recognise and pay tribute to the best achievements in Irish construction and design over the past 12 months and were held at the Ballsbridge Hotel recently in Dublin.

According to the awards team, the client brief for St Mel’s Cathedral was to “restore the Cathedral to its former glory whilst developing a liturgical setting fitting of a Cathedral of the 21st century and achieving a deadline of Christmas 2014, the 5th anniversary of the fire.”

The project presented the opportunity to consider and formulate a plan for the Cathedral as both a community campus and as an integrated urban feature link to the town centre of Longford.

In reading out the winner’s host Martie Whelan also read out a testimonial from the Bishop of Ardagh & Clonmacnois, Dr Francis Duffy, which said of the restoration “Wonderful skill and attention to detail as well as the best modern Irish art have produced a beautiful building; a nineteenth century structure with a twenty-first century interior that is faithful to the original and rejuvenated by the modern”.

St Mel’s was nominated for the award along with other building projects, including the Tullamore Distillery, the Rosie Hackett Bridge in Dublin, Blackrock Further Education Institute and Glanbia Ingredients Ireland’s dairy facility in Co Kilkenny.