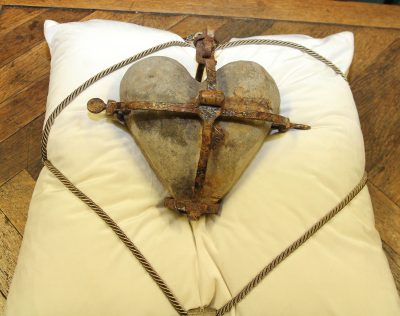 The heart of St Laurence O’Toole, a relic restored this month to Christchurch Cathedral, Dublin, after it was stolen in 2012 (Photo: Church of Ireland Archdiocese of  Dublin & Glendalough).

Although he was born nearly 900 years ago, much can be learned from the life of St Laurence O’Toole, according to Archbishop Diarmuid Martin.

Known in Irish as Lorcán Ua Tuathail and born in 1128, Laurence O’Toole became Abbot of Glendalough and then Archbishop of Dublin at the time of the Norman invasion. He led an extraordinarily busy life, playing the role of mediator between the native Irish and the invading Normans. Notably, he stopped the destruction of Dublin and the slaughter of unarmed people when Norman knights entered the besieged city.

When he died on 14th November 1180 in Eu in northern France, he was travelling to meet King Henry II to try and get the English king to honour the peace terms of the Treaty of Windsor. He was canonised only 45 years after his death.

Comparing Dublin today with the Dublin of 900 years ago, Archbishop Martin said the city was marked by violence, “something that has left me really troubled over the years”.

“Violence is always despicable, but over the years, I have become ever more concerned by the growth of knife crime. I am horrified when I hear almost daily stories of stabbings. Young people can begin to feel that carrying a knife can bring security. The reality is often the opposite and so often leads to tragedy. There are also are growing signs of unresolved anger which then affect day-to-day behaviour and discourse and social exchange.

“Knife crime among young people requires new and creative forms of community education and anger management. We cannot leave it up to young people alone to build safe communities.”

St Laurence was noted for his generosity to the poor, often feeding the needy at his own home. “Here again Laurence is an example for the Church and for society in our own times. Dublin is a wealthy city that has not managed to bring equality and caring,” said Archbishop Martin, noting that in his inauguration speech President Michael D. Higgins had alluded to the homelessness crisis and lack of equal access to education and health care.

The 12th century saint was always known as a man of prayer. Every Lent he returned to Glendalough and spent 40 days on retreat in St Kevin’s Cave.

“Prayer is not a flight from the world but something that can enrich and bring a different quality to our human interaction with other people,” said Archbishop Martin. “Social media can today be a very valid and successful way of communicating about faith. They can also lead to a sort of destructive addiction. There are some who seem to feel that the mission of the Church can be enhanced by uninterrupted negative twittering. There is nothing farther from the hope-filled message of the Church than such an addiction of pessimism.  We all need time to be alone to reflect and to pray.”

Above all, Laurence O’Toole was a Churchman, said Dr Martin in his pro-Cathedral homily. “Looking back at the history of the Church it is important to remember that the true reformers of the Church, even in the most difficult of circumstances, were those who showed that they loved their church and took up the weapons of love and tolerance to heal and reconcile.

“We thank God for the gift of St Laurence O’Toole and we call his blessing on all of us who form the Church of Jesus Christ in Dublin today in this 21st century.”