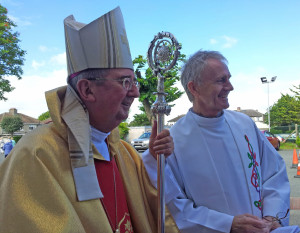 Archbishop Diarmuid Martin with Fr Hugh Hanley at the opening day of the St John Vianney novena in Artane parish.

St John Vianney saw himself as a “humble minister of God’s mercy” Archbishop Diarmuid Martin of Dublin said in a tribute to the Curé D’Ars at a Mass to open a special novena for the French Saint on Tuesday.

Linking the importance of mercy in the Saint’s ministry with Pope Francis’ special Jubilee Year of Mercy, he said if Christians fail to show mercy, “if we allow our lifestyle to become just like those in the world around us, we’ll never be able to mirror Jesus and his ability to bring true compassion to the men and women of our day”.

Archbishop Martin said Pope Francis had urged the faithful to ‘Be merciful just as your heavenly Father is merciful’ and underlined that this was a programme of life that is demanding and rich in joy and peace.

Referring to Pope Francis’ emphasis on mercy, the Archbishop said one of the themes highlighted by the Pope was that ‘God’s mercy endures forever’, which is a phrase taken from Psalm 136.

“’God’s mercy endures forever’ – it is fascinating because if it endures forever, we have to change our understanding even of heaven itself; eternal happiness isn’t something that we will live on our own terms,” he stated.

Dr Martin also recalled that the Gospel account of the Last Supper relates that just before Jesus left to go to the Mount of Olives, he and the disciples sang a hymn, Psalm 136.

“As Jesus went out to face suffering and death, he went out to the notes of ‘God’s mercy endures forever’.”

The Christian, even in really difficult situations, can never give into hopelessness, he emphasised, as God’s mercy is always by our side.

“Nor can the Christian give in to judgmentalism towards others. If we do that, we end up questioning and trying to put human limits on the fundamental fact that God’s mercy endures forever and that God’s mercy reaches out to everyone,” he warned.

Referring to the Gospel reading of how Jesus was saddened because he found the crowd like sheep without a shepherd, the Archbishop said that when Jesus spoke about his people being ‘shepherdless’ it wasn’t simply making a statement about numbers.

“This was really a discourse about his people being abandoned and scattered by those who are called to be shepherds. He was not talking about too few shepherds, he was talking about wrong shepherding.”

“The challenge we face as a Church in our world is that so many men woman and young people are left scattered and disoriented in their lives and are left drifting with so many activities and alternatives that they never come to grips with the deep question about who they are.”

“How do we reach out to them? All of us are called to the ministry of shepherding.”

Archbishop Martin referred again to the special Jubilee Year of Mercy which begins on 8 December 2015 and Pope Francis’ call to the faithful to rediscover the corporal works of mercy and the spiritual works of mercy.

“The Christian life is a life in which we are called to reflect God’s mercy,” he said and added, “We should never try to impose human limits on God’s mercy – think of the father of the prodigal son – and how he welcomes back this young man.”

St John Vianney parish in Artane is celebrating the special anniversary of the patron saint of priests between 4-13 August.

The 200th anniversary of the Curé d’Ars’ ordination falls on 13 August.

The novena incorporates daily Mass at 10am with veneration of relics of St Vianney, a holy hour and confession.

The parish has also produced a special prayer card and this prayer will be said each day after Mass for the duration of the novena.

St John Vianney was a French parish priest who spiritually transformed the community in Ars and its surroundings.

He was renowned in his own lifetime for his saintly life, mortification, his persevering ministry in the sacrament of confession, and his ardent devotion to the Blessed Virgin Mary and to St Philomena.

To honour the 150th anniversary of his death, Pope Benedict XVI declared a year for priests, running from the feast of the Sacred Heart 2009 until 2010.

Pope Benedict XVI also proclaimed St John Vianney the Universal Patron of Priests and “a true example of a pastor at the service of Christ’s flock”. The Year of the Priest was intended to encourage priests to strive for spiritual perfection.

PRAYER TO ST JOHN VIANNEY
St John Vianney, model of priestly life, pray for all ministers of the Church.

St John Vianney, tireless in your service of sinners in the confessional, pray for all who cannot bring themselves to confess their sins.

PRAYER OF ST JOHN VIANNEY
I love you, O my God, and my only desire is to love you until the last breath of my life.

I love you, O my infinitely loveable God, and I would rather die loving you than live without loving you.

I love you, Lord, and the only grace I ask is to love you eternally…..

My God, if my tongue cannot say in every moment that I love you, I want my heart to repeat it to you as often as I draw breath.