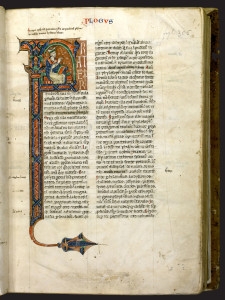 Medieval manuscripts and artefacts on St Francis of Assisi’s life and theological tradition will leave Italy for the first time in 700 years today bound for the UN headquarters in New York.

From 17 to 28 November, an exhibition titled ‘Friar Francis: Traces, Words and Images’ will be held at the UN headquarters before it moves to Brooklyn Borough Hall until mid-January.

“This exhibition’s arrival in New York will give Americans the chance to know the history and the spirituality of St Francis, and the chance to be inspired,” Ken Hackett, the US ambassador to the Vatican said at a recent press conference.

One of the highlights of the exhibition is Manuscript 338, a miscellaneous collection of medieval texts inscribed by at least nine different amanuenses.

It contains the ‘Canticle of the Sun,’ a praise and thank you to the Lord for such creations as “Brother Fire” and “Sister Water.”

Fr Pier Angelo Massetti, who is responsible for the restoration laboratory at the Praia Abbey, near Padua said St Francis wrote this poem.

“This text may be the foundation of the Italian language, the first text ever known in vernacular,” he added.

The medieval manuscripts and artefacts from the Sacred Convent of St Francis in Assisi, include papal bulls issued by the Vatican on St Francis of Assisi.

Every year the Basilica of St Francis in Italy receives around 6 million visitors.