St Columbanus can be seen as a model and patron of the new evangelisation, Cardinal Sean Brady suggested in Rome on Sunday.

The primate emeritus was speaking at the Church of Santa Maria Sopra Minerva at a Mass of Thanksgiving to celebrate the opening of the Jubilee Year commemorating the 1400th anniversary of the Saint’s death.

Asking what St Columbanus has to say to citizens of the third millennium, fourteen centuries after his death, Cardinal Brady said the relevance of his thought and spirituality was “extraordinary”.

That great monk and missionary, who died in Bobbio in 615AD, “succeeded in uniting faith with human dignity and freedom,” he said.

Recalling St John Paul II’s call for a new evangelisation of Europe after the decline in faith in recent decades, the Cardinal said St Columbanus’ missionary work could also be described as a second, and new, announcing of the Good News after the damage inflicted by the invasions from abroad and by the fall of the Roman Empire in the West.

“Columbanus and his monks brought the light of faith to people who, themselves, in turn became evangelisers until Europe became, once more, a Christian continent.”

Referring to the history of the Saint’s life, he said everywhere Columbanus went he remained devoted to the monastic way of life. He founded monasteries and wrote his own Monastic Rule.

“It can be truly said that the ways opened up through Europe, and the monasteries founded by him, were often the places where, later on, the Benedictine rule would flourish. With St Benedict, he helped to lay the basis for the European Monasticism of the Middle Ages.”

The Jubilee Year was opened on Saturday in the Basilica of St John Lateran, after the arrival and solemn reception of the relics of the saint from Bobbio, followed by a Mass, celebrated by Cardinal Vallini, Vicar General of Pope Francis for the diocese of Rome.

“We Irish are profoundly touched by the fact that so many parishes in Italy and elsewhere, so reverently keep alive the memory of Columbanus – an outstanding monk and missionary and saint,” Cardinal Brady told the congregation.

This, he said, was underlined by St John Paul II in a message to the people of Luxeuil in 1990 to commemorate the foundation of the monastery there by Columbanus fourteen hundred years earlier. 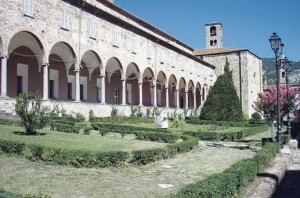 St John Paul II then wrote: “You are recalling a past that is still alive and recognising the gift, given by God, to the Church, in the person of great pioneers like St Columbanus. For the Lord has marvellously combined in St Columbanus, love of evangelisation, devotion to monastic life and the fullness of human dignity.”

The Cardinal also referred to the Saint’s lifestory, recalling that during the long years of being a monk in the monastery of Bangor and earlier in Cleenish – it obviously became clear to him that, in every age, the Church is called to make all its members disciples and missionaries of Christ.

He sought the permission of his Abbot – the renowned Comgall to leave the Monastery of Bangor and to set out as a pilgrim for Christ.

Abbot Comgall eventually agreed and so it was that Columbanus set out, on his missionary journey, accompanied by twelve brothers from the community.

There began the long journey which would take them first to present-day France, then Germany, Switzerland, Austria and finally to Bobbio in Italy.

It was the summer of 592 – Columbanus would have been fifty years of age and rather old for such an adventure in conditions of those days.

Over the next twenty years he founded a number of monasteries: Annagray and Luxeuil, in France; Bregenz in Austria and Bobbio in Italy where he died in 615AD.

The rule of Columbanus recommended that the monks should confess privately, and often, to one particular confessor.

“It was an effort to address the crisis that flowed from having only public confessions which were rarely celebrated more than once in a lifetime. Perhaps he has something to say to all of us today on that topic,” the Cardinal commented.

He also noted that in St Peter’s Basilica there is a mosaic dedicated to St Columbanus bearing the inscription – ‘If you take away freedom you take away dignity’.

“The phrase is taken from one of the letters of Columbanus. Indeed it is something that could have been written, not only by a seventh century missionary, but also by a citizen of today’s world, where so many people live in terrible conditions of slavery, fear and oppression.”

“In addition to the ancient forms of oppression such as war, poverty, loneliness, violence and exile, the modern world has new forms of slavery such as drug and alcohol addition, which are particularly destructive of human dignity.”

“The glory of God is the human person – fully alive.”