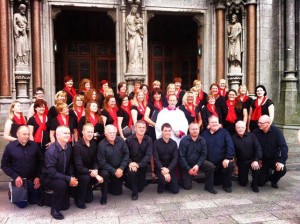 The combined cathedral and chamber choirs of St Colman’s Cathedral in Cobh are to sing at a special Mass for Pope Francis in St Peter’s Basilica this Sunday.

The Mass will celebrate the 500th anniversary of the Cappella Giulia, the choir of the Vatican basilica, or the ‘Reverend Musical Chapel Julia of the Sacrosanct Papal Basilica of St Peter in the Vatican’.

The Cappella Giulia is the choir of St Peter’s Basilica which sings at all solemn functions in the Vatican.

St Colman’s contingent is one of only two English-language choirs among just 19 choirs from around the world to receive this special invitation.

Their contribution to the fifth centennial celebrations will include a performance at the Holy Chapter Mass (High Mass) in St Peter’s at 10.30am on Sunday 21st July, as well as the 4pm Mass and also Solemn Vespers.

Choirmaster, Dominic Finn, said the 44-member combined musical group was stunned when it was invited to participate in the ceremony. He told the Irish Independent, “It is a tremendous honour and really is the kind of event that every choir dreams about.”

Pope Julius II (1503–1513) issued a Bull in February 1512 for the complete reorganisation of the Vatican Cappella, and this is traditionally seen as marking the beginning of the choir.

The current musical director or Maestro di Cappella is Padre Pierre Paul OMV. According to Dominic Finn, he extended the invitation to the Cobh choirs almost 18 months ago.

The choir will perform Missa Orbis Factor, Now Thank We All Our God by John Rutter, Faith, Hope & Love by Ronan McDonagh, Do Not Be Afraid by Philip Stopford and O Sacrum Convivium by Luigi Molfino.

The group of 85 who have travelled to Rome, includes 45 choir members. They are currently staying in the Irish College in the Eternal City.

The membership of the choir currently stands at 24 voices. The choir has taken awards at the Cork Choral Festival and has travelled to London, Vienna and Italy to perform at various events.

In 2009, the choir was asked to sing in St Peter’s Basilica for the Sunday liturgy, and they have also performed at Westminster Cathedral.

It has also recorded and performed with Fr Liam Lawton, and it features on his most recent album, ‘Healing Song’.