A caller to the RTE radio programme ‘Liveline’ says that St Anthony of Padua, the Saint associated with finding things, has a role to play in helping Ireland to win through in the European soccer championships.

Speaking to Joe Duffy on Thursday, Carmel Power from Waterford said that she and a friend were watching the heart-stopping game last Wednesday together.

“I kept saying, ‘God, if that ball only knew where the goal posts are, it could find the goal’.” She said to her friend “You’d nearly want St Anthony to find it.”

Her friend immediately got up and found a small statue of St Anthony and stood him on a shelf near the television. “It was facing us, but nothing was happening,” she said.

Then she said to her friend, “Look St Anthony can’t see the screen. He doesn’t know where the goal is himself! Would you turn him around to face the screen.”

Her friend obliged. “Within ten minutes we had the goal! St Anthony finds everything,” she told the popular phone-in radio show. 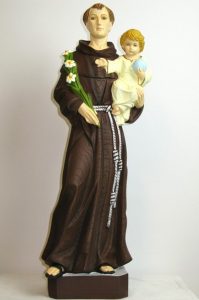 Ms Power described the game as “unbelievable” and paid tribute to the great Irish fans who “kept everyone going”.

Asked by Joe Duffy what saint could be asked to help the Irish team for Sunday’s match, Ms Power said she wondered would it be “pushing it a bit” to enlist St Anthony’s help again, but did not say she would not do so.

Tens of thousands of people across venerated the relics of the 13th century friar earlier this month when they were brought around different churches in Ireland.

The final visit of the relics of St Anthony of Padua was to St Patrick’s Cathedral in the Archdiocese of Armagh on Thursday 16 June where Archbishop Eamon Martin said he had decided to ask the Saint’s help “that many people in Ireland may rediscover the gifts of faith, hope and love, especially those who feel they have lost these powerful Christian virtues. So St Anthony, help us to find our faith again.”

The relics are visiting cathedrals and churches in Britain until 28 June.

Ms Power said that as the relics were in Ireland the saint was “on our side”.

Ireland takes on the host nation France today in Lyon at 2pm.