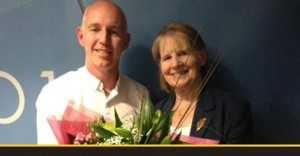 Sr Stanislaus Kennedy has credited the charities she founded and works with for her selection as ‘Ireland’s National Treasure’.

Interviewed by Ray D’Arcy on his RTE Radio 1 show, the Religious Sister of Charity nun paid tribute to the workers of Focus Ireland, Young Social Innovators, the Immigrants’ Council of Ireland and the Sanctuary.

“I am delighted (to receive this accolade) for the people who have worked with me in different ways,” she said as she thanked the Irish public for supporting these charities.

Sr Stan rejected the suggestion that her recent public announcement that she was in favour of same sex marriage had helped her win the ‘National Treasure’ award.

Ray D’Arcy asked if she had received ‘hate mail’ due to her Yes vote in the referendum.

“I lost a few people, not an awful lot, but some people who thought I was going against the wishes of the Church and what the bishops told us. But the bishops didn’t tell us, they just gave their views and left it to ourselves.”

“I’ve disagreed with the Church before. That is because in the past the Church has said things about gay people, for example that gay people were ‘intrinsically disordered’,” the nun who joined religious life in 1958 said.

“No I didn’t get hate mail but I got some letters from people who said they were taken aback,” she said.

She explained that she was never “easy” around inequality or injustice and she felt that there was a great inequality and marginalisation of gay people.

“I just felt that this was an opportunity to show acceptance of gay people and to give them the opportunity to marry and to have the rights of every citizen and I did not think it would take from the sacrament of marriage at all or from other marriages.”

She has not lost her passion for helping the homeless. She founded Focus Ireland 30 years ago having lived with some homeless women.

She told Ray D’Arcy that there are 5,000 or more homeless people at any one time in Ireland. It will take at least 18 months before promised social housing is completed, and yet every month more people become homeless simply through rising rents.

“One of the most appalling things is that families are becoming homeless, and last month 70 families became homeless. That is two or three new families every day,” she said.

“They arrive with their children and their few belongings at Focus Ireland and the only place we can offer them is a room in a hotel or a B&B. So you have, as we speak now, families of 4,5,6 cooped up in one room in a hotel. So that is staggering, and at this moment there are over 1 thousand children in emergency accommodation in Dublin.”

She called on the Government to ensure ‘rent certainty’ (no sudden and unmanageable rent rises), and that the rent supplement increase because rent is going “sky high” with up to 20% increase in Dublin.

“A person might be trying to pay their rent, but they reach the point where they cannot afford it anymore and they are immediately homeless. We’ve been asking and asking that the Government to increase the rent supplement. The Government says that the rent will go up, but there is a way of regulating rent – they do it in every other country,” she said.

In mid-June the Irish public was invited to vote on a list of well known Irish ‘personalities’ to choose Ireland’s National Treasure.