There are more than 2,400 children and nearly 1,200 families homeless nationwide. The Focus Ireland Christmas appeal has highlighted their plight and urged people to help.

“Christmas should be one of the happiest times of the year for children and their families. However, it breaks my heart to think that up to 2,500 children will be homeless on Christmas day this year,” said Sr Stan, founder of Focus Ireland. 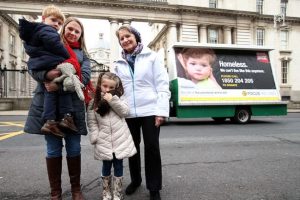 Sister Stan with Sinead Compton (Focus Ireland) and her children Aaron and Meabh.

The campaign was launched outside Government Buildings in Dublin with a mobile advertisement board showing the charity’s new poster with the headline: “Homelessness. We can’t live like this anymore.”

Sr Stan said that she meets families who are homeless through her work with Focus Ireland.

“It’s the children who feel it the worst. Many times a family who are homeless are often squeezed into one hotel room – three or four people in one room, nowhere to cook or for children to play.”

She added that couples and single people all need “a place to call home.”

Focus Ireland’s family team services have assisted 230 families and just under 450 children in Dublin in getting their own home during the first ten months of 2016*. The charity also supported hundreds of families who are still homeless and living in hotels and Bed and Breakfasts.

Sr Stan said: “We are working hard to support these families every day and not just at Christmas but we depend on donations at this time of year more than ever to raise vital funds so our services can cope with the rising demand.”

This Christmas will be very challenging because demand for services continues to rise. Last year, Focus Ireland supported over 12,500 people who were homeless or at risk of losing their homes. The charity has stated that a record number of over 6,700 people are homeless nationwide and more than 1,000 families homeless in Dublin. 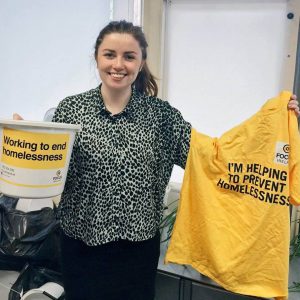 The homeless charity aims to provide 600 more homes by 2019. That comes to 150 homes a year over the next four years, and this would double its current housing stock.

Just recently, Louise Casey (aged 31), a young mother who was homeless, was found dead at a derelict building in Limerick where she had been sheltering from the cold. She was mother to two babies who had died and two children who were present at her funeral.

Fr Derek Leonard said at her funeral that society needs to “wake up” to the plight of the homeless community. He said that her death was a reminder to people to open their eyes to those who are suffering. He said that many pass by people who are homeless and living on the streets because the homeless have become invisible.

*In partnership with Dublin Region Homeless Executive and local authorities.