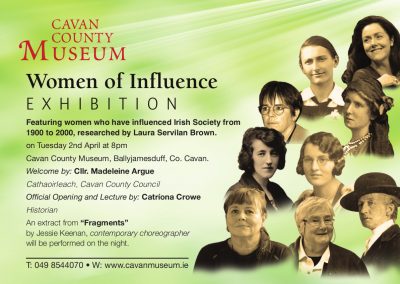 A missionary Sister who was friends with murdered Nigerian environmental activist Ken Saro-Wiwa, is one of the high-profile women featured in an exhibition at Cavan County Museum.

Sr Majella McCarron is a member of the Missionary Sisters of Our Lady of Apostles and spent decades as a missionary in Lagos in Nigeria.

She was selected as one of the women featured in the exhibition on the role of women in the Irish State from 1900 to 2000.

It is being hosted as part of the Decade of Centenaries by Cavan County Council.

The aim of the exhibition, which opened on Tuesday 2 April at the museum in Ballyjamesduff, is to share the stories of Irish women who have “achieved excellence in arts and culture, education, science, business and social change.”

It also aims to encourage people to identify and acknowledge the women who have and continue to work for greater equality in their own field in Irish society.

It was researched by Laura Servilan Brown, who is the John and Pat Hume Scholar at the History Department, Maynooth University.

According to curator Savina Donohoe, the exhibition is not intended as a definitive collection of women who changed Irish life. “But rather [it is] a fingerpost to discover the stories of some of the remarkable Irish women who achieved excellence in arts and culture, education, science, business and social change.”

The inspiration for this exhibition was the role played by women in securing greater equality including the right to vote, the right to be part of the paid workforce and to have a voice.

Historian Dr Margaret MacCurtin was one of the inspirations for the research and exhibition, which was commissioned by Cavan County Museum and Cavan Arts Office.

Sr Majella McCarron arrived in southern Nigeria in 1964 to teach science in a secondary school run by the Missionary Sisters of Our Lady of Apostles.

By the early 1990s, she was lecturing in religious education at the University in Lagos. Strikes at the university in 1993 resulted in lengthy periods when lectures were cancelled, and as she had just been appointed as the Africa Europe Faith and Justice Network’s representative, she used her free time to acquaint herself with the Ogoni issue and meet Ken Saro-Wiwa.

The ancestral land of the Ogoni was being ruined by the extraction of oil on a vast scale. As the oil drilling by corporations such as Shell took its toll on Ogoniland, Sr Majella became a confidante of Saro-Wiwa and gained his trust by drawing a parallel between the plight of the Ogoni and the Ireland’s colonial history.

On 10 November 1995 the world reeled at the news of the execution of the Nigerian writer and environmental activist along with eight other campaigners.

Sr Majella was back in Ireland when she learned the news. She had been trying to involve governments and the public in saving Saro-Wiwa’s life.

She had received a series of death row letters from Saro-Wiwa, the last of which arrived one month before he was executed.

Those that had found their way to her had been secreted in bread baskets and smuggled out of the military detention centre where he was held.

These personal letters to Sr Majella and other memorabilia can now be seen in Maynooth University.

In 2016, 28 letters which Saro-Wiwa wrote to Sr Majella while in detention were published in the book ‘Silence Would be Treason, Last Writings of Ken Saro-Wiwa’.

The book also reproduced 27 of his poems, some published for the first time.