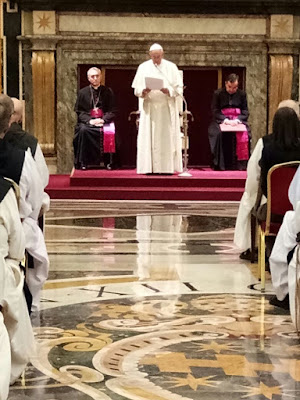 Trappist communities provide a valuable counter-cultural witness in today’s consumerist society, the Pope told members of the general chapter of the Order of Cistercians, Strict Observance (OCSO), which is currently meeting  in Assisi.

The order is separated into two chapters, one male and one female, but they hold a joint general chapter meeting once every three years  ‘to foster peace and charity among themselves, and to make appropriate decisions for maintaining the patrimony and unity of the Order’.

In a special papal audience this weekend, Pope Francis told those taking part in the general chapter meeting, “From the outset, the Cistercians of Strict Observance have made themselves known for their great sobriety of life, convinced that to concentrate on the essence, and so to reach more easily the joy of the spousal encounter with Christ, should be a valid help. This element of spiritual and existential simplicity preserves all its value as a witness in today’s cultural context, which too often leads to the desire for ephemeral goods and illusory artificial paradises.”

The Holy Father told the monks and nuns present, “Throughout its history, your order has known times of grace and moments of difficulty; but it has always persevered in fidelity to the sequela Christi [‘walking in Christ’s footsteps’, a common reference to choosing the monastic life], having as its purpose the glory of God and the good of the people. Continuing in the way of your spiritual tradition, may you read the present state of the order in its shadows and lights, and in the novelty of the Spirit, identify with courage new possibilities and occasions to witness your charism in the present of the Church and of society.”

The order’s separate existence from the rest of the Cistercian family is rooted in an internal reform movement which began in the 1660s at the La Trappe Abbey in Normandy, France  — hence the name ‘Trappist’ for the order’s members.   The reformers felt that the Cistercian order had started to become relaxed in its observance of the Rule of St Benedict and in 1692, Papal recognition was given to the new group known as the Order of Cistercian Strict Observance (OCSO).  In common with the Cistercian Order of Common Observance (OCist), which was founded in 1098, Trappist monks and nuns wear white robes over their habits.

The blog of the General Chapter can be found at, cgen-ocso.blogspot.it