Spirit, which broadcasts on FM and medium wave, went on the air at the height of the recession, but in spite of this has managed to attract a weekly listenership of over 206,000.

“We say we don’t believe in miracles, we depend on them!” Rob Clarke, CEO of Spirit told CatholicIreland.net.

“There were times when we didn’t think we’d make four years so it is brilliant to be reaching this point.”

Spirit negotiated its licence at the height of the Celtic Tiger with expectations created by “boom time”.

The collapse of the economy delayed the station’s launch, but finally on 27 January 2011 Spirit was on the air.

“We are a listener supported station so to be looking for money from people at a time when they’ve been really pressed has been tough going.   But the positive side is that it has helped us to really pare down to the essentials,” says Rob Clarke.

The station which broadcasts 18 hours a day, has a staff of 40, many of whom are volunteers. It presents a mix of music, quick reflection points, features and news.

“It would be very important for us to emphasise Christian news, and news that other stations are not covering,” Áine Carvil, head of news told CatholicIreland.net.

“I scour websites from Christian Today in the UK, to the Vatican News website to Christian Post in the States, looking for those stories that would be important for our listenership.”

Staff and volunteers come from a variety of Christian denominations – from the Catholic and Protestant Churches, to Evangelical and Pentecostal ones.

When you are focused on the heart of the Gospel and are working together, things keep rolling forward, says Rob Clarke, who is Catholic, and the station ends up being a focal point for Christians of many hues.

“They say ‘In an extraordinary way you’ve got the whole Christian community connecting through the radio station’.”

More essential to the team, however, is Spirit’s role in introducing people once again to Christianity. 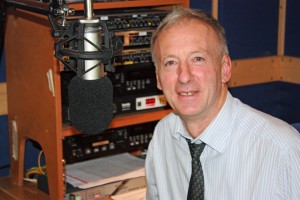 “We see our role in a certain way as warming people up to the Christian faith again and presenting a side of Christian faith that is contemporary and touching the real issues of life – getting the kids to school, paying the mortgage and dealing with relationships.  We try to show the relevance of Christian life to the ordinary business of life.”

Wendy Grace, who presents the morning programme, says Spirit is different to other stations because it is not commercial and because the vibe coming from all those who work for Spirit is so positive.

She believes listeners experience this.

The station tries also to be a voice for people who suffer, like those with  addictions or suffering from depression.

“I believe we have a role in suicide prevention,” says Rob Clarke. “When people are suicidal they are often moving away from key relationships but one of the last things they turn off is the radio.”

“We’ve had many messages from people saying ‘I was really low. Thank you for talking about suicide.’ So we know the radio is a kind of companion that is continually pointing people towards the source of hope – Jesus Christ.”