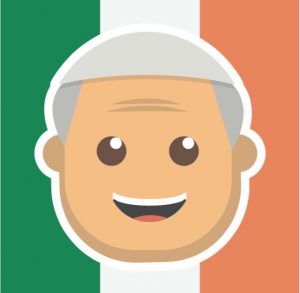 A dedicated Twitter emoji which has been created to commemorate Pope Francis’ visit to Ireland is to be launched later today.

The emoji is part of a special welcome to the Pontiff on his historic visit over 25 to 26 August and is the fruit of a collaboration between the social media giant and the World Meeting of Families 2018.

The emoji can be accessed by using the hashtags #popeinireland, #pápainÉirinn, #WMOF2018 and #festivaloffamilies on Twitter.

It features an image of Pope Francis in front of the Irish flag. Another emoji will feature the Pope in front of Knock Shrine.

According to Twitter, the emoji is an acknowledgement that the visit of Pope Francis for WMOF2018 is being closely watched by people all over the world, and especially in Ireland.

According to Karen White, Twitter’s Director of Public Policy for Europe, “The visit of Pope Francis is one of the biggest events happening in Ireland this year and naturally many people will be using Twitter to discuss his time here. We want to encourage everyone across the world to join the conversation on Twitter about his visit to Ireland so we’ve created this special emoji for people to use.”

Brenda Drumm, Media & Communications Manager at the World Meeting of the Families 2018 highlighted that “Pope Francis himself is a Tweeting Pope with millions of followers on Twitter.

“This Pope emoji is a wonderful way to connect the conversation on Twitter about Pope Francis’ visit to Ireland for our global gathering of families at WMOF2018.”

Brenda Drumm added, “We’re excited to see the Irish version of a Pope emoji being launched as we previously saw how well the American and Latin American emojis were received on his visits there.”

Similar emojis were created during Pope Francis’ visit to the United States in 2015 for the World Meeting of Families in Philadelphia. Twitter has also launched custom images for events such as the World Cup, the Eurovision Song Contest and the Olympics.

#SeeWhatsHappening for Pope Francis’ visit to Ireland for WMOF2018 and unlock the special emoji to join the celebrations: #PopeInIreland #PápaInÉirinn #WMOF2018 #FestivalOfFamilies