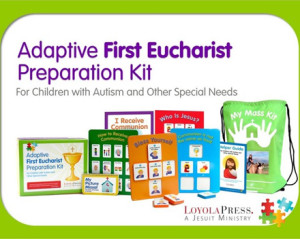 A kit to help children with special needs making their First Holy Communion has proved such a Godsend that kits for other sacraments and an entire faith formation curriculum have been developed.

Two years ago, the Irish Jesuits highlighted the American kit by Loyola Press and many have been sent to Ireland since.

In Irish Jesuit News, Jo Ellen Chicharelli, the Director of Curriculum Development with Loyola Press, related that the latest addition to resources for people with special needs is a new Adaptive Finding God Programme curriculum.

It has been almost two years in the making and helps people who may not be able to speak or read, and those who teach them, to follow a faith programme suited to them.

Jo Ellen Chicharelli said that the development of the Communion kit and the subsequent First Reconciliation and Confirmation kits and the new curriculum has meant more to her than any other project in her 20-year career.

“People with special needs do have spiritual lives and how they see the world is so pure and so simple that they can sometimes more easily understand the divine than we can. So I think it is very important to allow them to partake in all that the rest of us are allowed to,” she said.

She knew she was onto a winner when 15-year-old young Brendan Rizzo sent her a kit he had made himself for his sister Danielle, who has autism.

She wasn’t allowed to receive communion until she demonstrated that she could distinguish the Eucharist from ordinary food and receive it in a reverential way, as required by the Church in America.

She could not speak, so her brother and parents developed a series of cards with pictures and symbols which she could match up.

For example she paired the picture of the host and chalice with one of Jesus Christ rather than with a picture of food.

When the First Reconciliation kit was developed it included printed cards stating “I’m sorry”, and a booklet that the child can bring into confession to help them to follow the various steps.

Loyola Press and Danielle’s family worked together on what became the Adaptive First Eucharist Preparation Kit.

It contains eight pieces, including picture cards that help children maintain focus during Mass and a matching puzzle that helps children differentiate between the Host and ordinary food.

Until Loyola Press began this project, many children had been deemed not “able” enough to receive the sacraments.

One man told Jo Ellen Chicharelli that his grandson, aged 27, had autism and had been denied the sacrament. With the help of the kit he was able to receive communion within three weeks.

In Ireland, children are usually prepared for First Communion and Reconciliation in class. Those with special needs are known by the teachers who can help them prepare. However, there are still huge challenges for the special needs child and their family.

One family in south Dublin have just been through the experience. Their boy is on the mild side of the autism spectrum and attending mainstream school.

Helping him to understand the ‘real presence’ in the Eucharist with his literal and logical mindset was not easy. Eventually, they hit on the explanation that the host is like ‘camouflage’ for Jesus.

On the day itself there was the worry of how he would cope with all the excitement and the changes to his usual routine.

Also he would find it most difficult to sit still and quiet and remain in the church with crowds and noise which he hates. However, it all went well.

His mother told CatholicIreland.net that it was a very spiritual experience for her son who says his prayers every night.

“He is probably more spiritual thanother children. We say prayers every night with him. He has a real relationship with God,” she said. “He has asked God why he has autism and why won’t God take it away.”

She was not aware of the Adaptive First Eucharist Preparation Kit, but intends to look into it as a resource to help her son as he continues his faith journey.