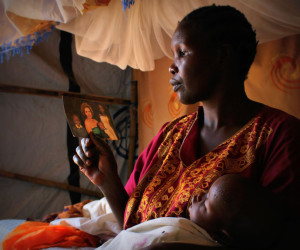 As South Sudan marks the third anniversary of its independence, Trócaire has published interviews with people living in camps outside Juba, the capital city.

Zainab Rahma, who lives in a UN camp for displaced families, does her best for her five children and baby Madelina who is four months old and who will never know her father.

He was killed almost six months ago in ethnic clashes that have become all too common in South Sudan.

“Most days I wake-up and think of killing my children so we can escape this life,” she told Faith Kasina of Trócaire.

“But then I see that smile (of my baby) and I choose to live.”

On 9 July 2011, South Sudan was declared an independent state. Everyone had great hopes for the world’s newest nation and there was the support of many other nations to help it onto its feet.

Peter Malis, volunteering with Trócaire partner, the Daughters of Mary Immaculate (DMI) Sisters said, “I was there in the stadium, clad in my cultural wear, celebrating with the rest of the country. I have never felt as proud of my country as I did on that day. I was hopeful that life was going to be different.”

However, in mid-December last year a political feud between the country’s two top leaders reopened an historical tribal conflict and war.

A retired (and now displaced) soldier told Trócaire that the very people who fought for their freedom turned against each other.

Trócaire, in partnership with the Daughters of Mary Immaculate (DMI) Sisters, has been distributing food items and has supported psycho-social counselling to families living in camps which accommodate displaced people. 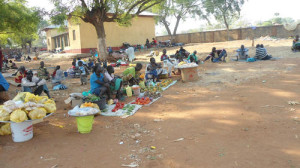 The many efforts to broker a peaceful resolution to the crisis have borne little fruit, and there have been allegations of the dishonouring of signed agreements by the warring parties.

On the frontlines there is still fighting, lives are being lost and people are still fleeing their homes, seeking safety in displacement camps.

Farms are still unploughed although there was a “month of tranquility” in May to allow at least some people to get back to their fields to plant and harvest the coming crops. People have tried to keep hope alive.

“No one can deny that it is an ugly situation,” says Bishop Erkolano Tombe, Caritas’ resident bishop in the country.

“But South Sudan has a great future. We have natural resources and great wealth and can benefit from these only if we are responsible with our freedom. It is painful, but it is passing.”

Agenzia Fides has reported on a particular problem highlighted by Doctors Without Borders (MSF) that there has been widespread violence at hospitals and the destruction of medical facilities, which denies medical services to many of South Sudan’s most vulnerable people

Doctors Without Borders (MSF) in the report ‘South Sudan Conflict: Violence Against Healthcare’, states that since armed conflict erupted in South Sudan in December 2013, at least 58 people have been killed on hospital grounds, and hospitals have been ransacked or burned on at least six occasions.

MSF states that patients have been shot in their beds and lifesaving medical facilities have been burned and destroyed in the towns of Bor, Malakal, Bentiu, Nasir and Leer.

In the latter town, the only hospital in the area providing secondary healthcare, including surgery and treatment for HIV and tuberculosis, in an area with approximately 270,000 people, was destroyed.

Because of the conflict in South Sudan, nearly 1.5 million people had to leave their home.

Among these there are a million displaced people in the country and 378,000 are seeking refuge in Ethiopia, Kenya, Sudan and Uganda.

Life expectancy is 54 years of age, the maternal mortality rate is 730 per 100,000 live births. More than half of the population lives more than 5km walk from the nearest health centre.

South Sudan became an independent state on 9 July 2011, following a referendum that passed with 98.83% of the vote.