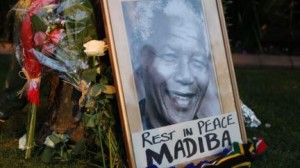 The world was in Johannesburg today (10 December) to pay tribute to Nelson Mandela.

World leaders, royalty, public personalities and millions of South Africans gathered in torrential rain, to honour the man who brought democracy and reconciliation to South Africa, and became an icon for the rest of the world.

Throughout the weekend there were religious services in churches, synagogues and temples across South Africa.

People began assembling in the FNB Stadium in Soweto at 5.30am for today’s memorial celebration.

President Barak Obama hailed Mandela as a “giant in history”.

Cardinal Peter Turkson, President of the Pontifical Council for Justice and Peace, was appointed by Pope Francis as his special envoy to participate in the event.

In an interview with Vatican Radio’s Linda Bordoni, South African Cardinal Wilfrid Fox Napier, Archbishop of Durban, said the nation was filled with a sense of gratitude for what Madiba stood for, and for the things he did for his country, his people and their future.

Cardinal Napier said that to build the ‘rainbow nation’ and forge a democratic society, Nelson Mandela’s clear vision led him to “break ranks with his own party in order to enter into negotiations”.

He did this “with a very clear vision of the kind of South Africa he wanted to emerge from those negotiations – a country where everyone would be respected, accepted and even loved as a brother or sister.”

The South Africa that he was dreaming about “would be a South Africa filled with ‘Ubuntu’ or that ‘humaness’, that fellow-feeling, that mutual respect”.

The Cardinal said the fact that Mandela “shared that dream with so many people has given rise to the overwhelming sense of gratitude for what Mandela has done for us, and been for us”.

Cardinal Napier said that although Mandela was not a Catholic, much of what he did and stood for is very much in line with Catholic Social Teaching, which “de-codifies what are the highest ideals in the human heart and the human spirit”.

He continued, “Certainly, when you look at the way Mandela related to people, the first impression you got when you entered into a relationship with him was: this man is making me feel human, this man is showing me such respect I cannot but respect myself and in the course of respecting myself, respect others in the same way he has respected me”.

Cardinal Napier also pointed out that the whole idea of repentance and reconciliation is not very common in politics.

But that is what Mandela was preaching when he started off the negotiations, “in order to change, we must change ourselves in order to start changing others and change the whole situation – very Catholic values, very Christian values, very human values…” the Archbishop of Durban said.

In Cardinal Napier’s written tribute to Madiba, he acknowledges the capacity of the South African people to respond and to act on Mandela’s invitation to follow him in his journey to build one nation.

In the interview, the Cardinal said that energy is coming through at the ceremony today, the same atmosphere one has experienced in other memorial ceremonies or celebrations.

“I call them celebrations because they are about thanksgiving”, he explained.

“Of course there is mourning because of the loss of a great man, but there is even a greater “sense of appreciation of what he has been and what he has made us become.”

Now, Cardinal Napier said, “we have a tremendous task of climbing back up to the lofty heights where Mandela had led us and where unfortunately our subsequent President has allowed the country to slip away from.”

“I believe that many, many people have suddenly woken up to the fact that when Mandela retired we didn’t just lose his presence, we lost a lot of his spirit and his idealism as well. What has overtaken the country at the present can be undone, but everyone has to work the same way as Mandela did: selflessly, giving himself to others, looking to the common good”.

Cardinal Napier said the best tribute one can pay to someone you have admired is to imitate, and even emulate him, try and be even better than that person.

He noted that many times in the speeches today and in previous days, the word ‘icon’ has been used.

“I think many people are using the word ‘icon’ as something that you put high on a pedestal, it is so unreachable that the only thing you can do is admire it. I think Mandela is the kind of icon that says: “come and be like me. All you’ve got to do is realise your full human potential – come, do it, I’ve done it.”

The Cardinal concluded by thanking the whole world for “reminding us what a great man South Africa has produced” and by waking us up to the fact that “if you want a great man to have an impact on you, the best you can do is try to become like that great person”.

And that is what I think the world has done for us coming to South Africa in such great numbers: Paying tribute to Mandela but also reminding us that it is possible to do the same in our day and in the future…”.

Nelson Mandela’s body will lie in state for the next three days. His funeral will take place in his home village of Qunu, on Sunday.